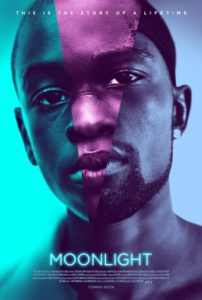 RYAN: I’ve gotta jump on the bandwagon with all the incredible buzz surrounding Moonlight – it’s such a different kind of movie that tells a great story, that I’m happy to join in the chorus singing its praises.

CAROLINE: You really can’t turn anywhere in movie circles these days without hearing about this one. I haven’t seen it, but understand it’s a coming of age drama.

RYAN: Yes and it’s a very fresh voice for film. It blends the African American community with themes of masculinity, parenting, relationships, sexuality… There’s a very mature artistry to this film that helps it soar. The story is one part, with excellent casting and performances. But the cinematography and the scoring, especially, really take it to great heights. It’s one of those amazing scores that stands out in a beautiful way. Certainly one of the best of the year, by composer Nicholas Britell, whom I recently had the pleasure of interviewing, which you can read here.

CAROLINE: That’s awesome. Why did it stand out so much?

RYAN: You can read more detail in the interview, but the musical score is incongruous with the picture; and yet it works so well together. It’s a gritty story of today, on the streets, with harsh realities about drug addiction, bullying, torn families – and then the music is juxtaposed, sounding classical.

CAROLINE: That’s cool. And how did you enjoy the cast?

RYAN: So good. This movie breaks down into three chapters and the first two are absolutely stunning. You feel so much for this your boy and all he’s going through and figuring out. It’s a very difficult world he has to navigate through. And the young actors who play him are brilliant. You really feel their youth and loneliness. I especially like Ashton Sanders in the second chapter. They’re all fantastic – it’s hard to pick a favorite. Naomi Harris is totally different than you’ve ever seen her. She’s pathetically tragic and terrifying and just excellent.

CAROLINE: It sounds like a really different kind of movie.

RYAN: It does give you a deep look at a life very different from your own, but then you identify with all of the emotions. Parts one and two are the best and three stalls a lot. It almost feels like it doesn’t belong at times and I could have done without it altogether. You wanna see what happens in this third chapter, but It’s just a lot slower than the first two thirds. It’s a good one.

Thanks For Viewing The Moonlight Review