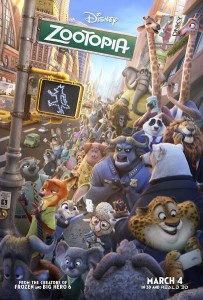 RYAN: This is the new Disney animated 3D movie. They’re consistently good so when Disney comes out with the next animated feature, it’s just a question of how good is it? Zootopia is outstanding. It’s not Inside Out. But not everything can be Frozen and Inside Out. This is still a 10. It’s an adventure, a mystery, amazingly entertaining but also meaningful and enlightening. It’s a statement movie.

CHUCK: It went to a level of social commentary I didn’t think Disney animation would go to.

CHUCK: Not to this level though.

CHUCK: Inside Out went deep too.

RYAN: You’re right though. Zootopia is about racism.

RYAN: But now Disney is going to places we didn’t expect them to go and it’s wonderful.

RYAN: In the 80s and 90s, Disney moved in a new direction with brilliant animation for all ages, entertaining kids and putting innuendo in to speak only to the adults in the audience. Now they’re going one step further again, making socially-conscious films that mean one thing to kids and another to older audiences and the type of conversations you can have with your kids after the movie are so great, walking out of Inside Out and Zootopia. These movies will continue to mean new things to the audience as they age.

CHUCK: Absolutely and it’s important to instill these lessons in your kids. The timing is interesting with this year’s Oscars, tackling and issue we deal with in this industry, in this country, around the world.

RYAN: And the vocal talent had some diversity in it, courtesy Idris Elba and Octavia Spencer.

CHUCK: It is a very good movie. The cast is perfect. Ginger Goodwin and Jason Bateman are brilliant – Jenny Slate…

RYAN: The 3D is good, the animation…

RYAN: I love the initial premise and I identified with the coming of age themes at the start of the film and then it turns into a great adventure/mystery.

RYAN: It’s like a good episode of Murder She Wrote, without a murder.

CHUCK: (laughs) Right. They created so many different, cool locations within the city.

CHUCK: There are meta Disney and Breaking Bad references. Much is for the adults and they’ll appreciate it. It’s very impressive.

RYAN: Its early in the year, but I’m sure this will be among the nominees for Best Animated Feature.

CHUCK: This is probably among my top 10 favorite animated Disney films.

CHUCK: Fantasia, Sleeping Beauty and The Little Mermaid. What are yours?

RYAN: Frozen, Cinderella, and The Hunchback of Notre Dame.

CHUCK: I appreciate the intelligent script that really speaks to anyone outside of the mainstream.

RYAN: And there’s no doubt about it this time, there’s definitely a gay character in this movie. Such a brave message movie. Shakira.

Thanks For Viewing The Zootopia Review