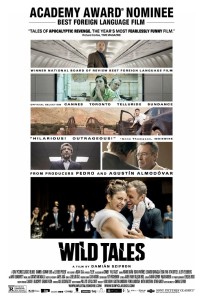 RYAN: Wild Tales was an Oscar nominee in the Best Foreign Language Film category.  It’s from Argentina in Spanish with subtitles and it’s such an amazing movie I can barely stand it.  I was shaken to the core watching this movie.  It’s the kind of film that wakes you up and makes you feel more alive.

CAROLINE: How is that even possible?

RYAN: Remember when we saw Funny Games in 2007 and it freaked us out?

CAROLINE: Yes it terrified us.  That was a horror movie.  Is this also a horror film?

RYAN: No but it’s disturbing and had a similar impact.  It’s actually the first movie since then to really affect me that way.  There have been moments in movies over the years that were disturbing here and there but this one really has that tone that keeps you on edge the entire time.

CAROLINE: That is cool.  I know you like that kind of filmmaking.

RYAN: It’s really incredible because you just want to talk to other people about it.  I saw this at a press screening with other critics and I wished I could have paused the movie a couple times and turned to the other people to as, “Did that really just happen? We need to talk about this!” But, of course, you can’t.  I was just very excited and freaked out and I can’t wait for other people to see it so we can all talk about it.

CAROLINE: Well I certainly want to see it now and talk about it with you.

RYAN: It’s six short films are all written and directed by the same person, Damiån Szifron.  And as you view, you notice that a theme of revenge runs throughout them.  It’s primarily acute drama wish some comedic moments as well.  If you don’t know too much about what’s going in, it’s better because even just the first scene makes you stop and think, “What am I in for here?!”

CAROLINE: I love that.  I really wish I could have screened this with you.  We probably would have been grabbing each others’ arms.

RYAN: No doubt of it.  It’s shot beautifully.  There’s a very artistic, yet accessible quality to it all.  Each story features characters in extreme situations and you can really empathize with what they’re experiencing.  It’s true escapism.

RYAN: It is brilliant.  Wrenching drama.  See it and enjoy!

Thanks For Viewing The Wild Tales Review