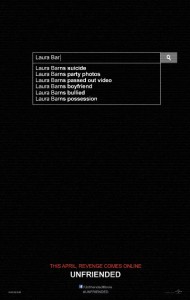 RYAN: I’m happy to welcome Tim Westbrook to the site!  You may know him as a designer from TV’s Project Runway, and he’s still brilliantly blending fashion and sustainability/environmentalism. Tim, you’re an inspiration!  And you happen to enjoy horror films, so I am glad you wanted to guest-review this one with me.

TIM: Thanks for having me! I love a good scary movie.

RYAN: We just saw Unfriended and my number one hope for any horror movie is for it to be scary and this one is not.  There’s basically no story.  It’s just a premise that is stretched over an hour and twenty minutes.  It works, somewhat, but it’s entirely on a computer screen – on Skype – and it’s annoying even after you adjust to it.  You’re just looking at a computer screen the entire time.  I’d be impressed if it were a student film; but for a Universal-released horror film, I’m scratching my head.  It’s the next step devolving from the found footage “paranormal” movies.

TIM: I don’t think we’re the target audience for this movie.  The whole time I was thinking this is a movie that’s made to scare the children to not bully one another.  Do you use Skype or YouTube that way? Of course not.  Cyberbullying is so real!  It’s an important message.

RYAN: True but it’s an R-rated movie and kids shouldn’t be allowed in.  Though it’s really a light R – for basically some gory images and maybe some language.  I didn’t notice any nudity.

TIM: The R rating might entice kids to try to get to see it, you know?  But I feel like it has a strong perspective about technology and even the title – Unfriended – there’s a feeling of things being not permanent, but there is a sense of permanency when things are published because even if it’s taken down, there are always traces of it out there.

RYAN:  It’s a thin premise but I was compelled to keep watching.

TIM: Yeah I was wondering half way through if you were just wanting to get up and walk out but then I think we were both curious to see how it would end.

RYAN: For sure.  It’s an unknown cast and they’re alright – you can’t tell what’s scripted or ad-libbed. It really follows the cliched horror notion of young teens are out in a cabin in the woods and one goes off on his own, etc… except this time instead of being in the woods, they’re on a Skype conference call.  It’s very predictable.  It’s unoriginal – just a modern twist.

TIM: I noticed some weird continuity issues with things on the computer screen.  But I did like the sound in the theater.

RYAN: This is not one to see in the theater.  Because it’s all on a computer screen, it would be much more effective to be seen on a laptop or any device, streamed online or downloaded someday so wait to rent it that way.

Thanks For Viewing The Unfriended Review