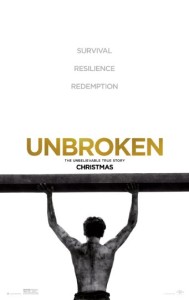 RYAN: This is the kind of movie that makes me excited I get to vote for an awards show.  It was snubbed at the Golden Globes but is nominated for Best Picture at the Critics’ Choice Movie Awards.  I’m proud to be a member of the Broadcast Film Critics Association and this movie’s gonna get my vote.

CAROLINE: I almost can’t believe you’re saying this. You hate war movies.  As a general rule, the genre as a whole – you’re not into it.

RYAN: I’ve always said that but then there are several war movies this year that I’ve loved so I think I need to hang up that statement.  I’m embracing they are painful to watch because they’re real.  Unlike horror movies where you can dismiss it all as make believe, the horror in war movies actually happened to real people so they get under my skin.  But some are just so great… like Unbroken.

CAROLINE: And directed by Angelina Jolie.

RYAN: She didn’t just direct it… she die-rected it!  This movie is a masterpiece.  It’s impeccably shot.  It looks like Forrest Gump or a Spielberg movie.  She worked with a top notch team of talent across the board on this film and it shows in every aspect – cinematography, editing, makeup, score, art direction… it’s all perfect.

CAROLINE: Wait – if Into the Woods were nominated, you’d vote for that instead, right?

RYAN: (laughs) Yes but it’s not so the point is moot.

CAROLINE: Ok, just had to check.  What impressed you most about this movie?

RYAN: So much.  The opening scene is so intense. It’s, like, Saving Private Ryan intense.  And it’s there are shots in an airplane where you just think, “how did they shoot that?!?!”  Brilliant.  The effects are incredible.  And they’re not like Hobbit effects; they’re war effects so it’s different but amazing.  They make you cringe with what it would be like to be at war, just like in Saving Private Ryan.

RYAN: It focuses on the true story of Louis Zamperini who was an Olympic athlete turned soldier and his story is phenomenal.  He was an athlete, an underdog, a prisoner, a victim, a hero… a survivor.  It’s really an inspiring story.  Unbroken indeed.

CAROLINE: It really is a remarkable story.

RYAN: It’s all a testament to what the human spirit can endure, although I couldn’t have survived a fraction of what he did.  He was so brave it’s insane.  He spent 47 days stranded at sea.  He was tortured in World War II detention camps.  The actors lost a ton of weight, appropriately for their characters.  He lived a nightmare. It’s scary and tragic.  The movie is so suspenseful.

CAROLINE: Clearly this is a must see of the year.

RYAN: Absolutely.  I don’t think I could do repeat viewings, but it has to be seen.  And, again, this gets my vote for Best Pic.  Or maybe The Imitation Game.  I really need to make up my mind.

Thanks For Viewing The Unbroken Review