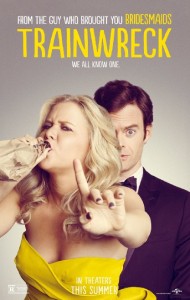 RYAN: This is the latest comedy from director Judd Apatow, whom we both love as a helmer in this genre.

CAROLINE: Love!  The 40 Year Old Virgin is one of our favorite comedies ever and I’m equally enamored with this writer/star Amy Schumer.  I’ve been lit’rally dying to see this movie and wish we had screened together.  So tell me everything!

RYAN: You’re gonna freak!  There’s a brilliance to this work that just tickled me across all levels.  I’m relatively unfamiliar with her outside of pop cultural relevance.  I’ve seen bits of her hosting and comedic abilities but never her actual show.

CAROLINE: I love her TV show.  I mostly catch sketches online but have been a fan of hers for a while.  And I also love Bill Hader so this has been one of my most anticipated movies for a long time.

RYAN: Gosh, you’re in for such a treat.  This is one of those comedies that just shoots and scores and your face hurts from smiling so much.  It’s pretty flawless.  And there are plenty of moments when you’ll LOL.

RYAN: It’s a comedy but at its heart a rom com, the same basic formula as with 40-Year-Old, you know, broken adult comes around to love.  It could be my life story.

CAROLINE: (laughs) Stop.  You don’t drink that much.

RYAN: True.  The film is really unique in how it deals with some of the themes.  There are scenes were you wouldn’t wanna be sitting next to your folks whilst watching.  It may make you blush.

CAROLINE: Oh Amy and Judd are both known for doing racy, adult, R-rated material.  I can only imagine how they deliver in this movie.

RYAN: It certainly helps Amy wrote it – because it’s very much tailored to her strengths and her brand of humor.  This is going to make a star of her and she’ll peak – like any comedian.  But this is so much fun, in this moment, before we become desensitized to her, like McCarthy, or anyone else where you feel like, “Ok – I get it – this is what you do.”  At this point it’s very fresh and new and awesome.

CAROLINE: Totally.  So what are some of the themes in this film?  Relationships, obviously…

RYAN: Yes.  Monogamy, issues with dating, friends, family ties… it’s great because some of the best comedies have a bit of dramedy to them that ground them and really give the whole project a bigger impact.

CAROLINE: Yes absolutely. I just love an adult comedy.  It seems like so many movies go after the larger audience and dumb comedy down to the PG-13 level.  But I love that in a R-rated film, we’re all adults and the artists can just go for it.

RYAN: Yes this movie is NSFW.  And I’m obsessed with Tilda Swinton in it.  I’ve always wondered what she’d look like with a regular glam makeover and you see her that way here because her character is sort of Meryl Streep in The Devil Wears Prada.  I def wanted more of her and feel like she could get a Supporting Actress Oscar nom for this bit part.  So good.

CAROLINE: She’s so good and peculiar.

RYAN: There’s been much to do about female driven comedies since Bridesmaids.  And this is another good one for the pile. I don’t like spoilers, but I have to mention how brilliantly awkward it is when they’re having full conversations during sex scenes.  It’s never done so it’s so original.

CAROLINE: How’s Bill and the rest of the cast?

RYAN: He’s terrific.  He and Amy both have real story arcs for their characters and that dimensionality really strengthens the script.  And the few cameos are amazing.  You have Dan Radcliffe, Marisa Tomei, Matthew Broderick and major sports figures.

RYAN: It’s Thee Comedy of the year. Calling it.  It’s refreshing to see the woman in the rom com be the one who sort of flips the script, pun intended.  She’s a late bloomer and it’s a different coming of age story.  Great, great ending too.

Thanks For Viewing The Trainwreck Review