Tom & Jerry: Back to Oz Review 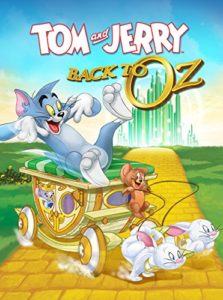 New on DVD Tuesday June 21 – and available now digitally – Tom and Jerry Back to Oz is as close to a direct sequel to the 1939 classic film we may ever see. In 2011, Warner Bros released Tom and Jerry and The Wizard of Oz on Blu-ray and DVD – recreating the original film in beautiful, classic animation with the infusion of Tom and Jerry to aid Dorothy along her journey. This new film literally picks up where the last one left off – in Dorothy’s bedroom as she utters the famous line “There’s no place like home” and then fully realizes a new adventure, including familiar locations, costumes, characters and even songs.

There’s something sacred about the original film that makes the concept of a direct sequel almost sacrilegious, but produced by Warner Bros, and taking full advantage of the Oscar-winning score, it’s like a dream come true – stepping back into the fantasy of MGM’s Ozzy vision – in a way only animation could do. The vocal talents pay homage to the iconic cast and new characters, featuring the celebrity voices of Jason Alexander, Andrea Martin, Frances Conroy and Broadway’s James Monroe Iglehart. What’s more, for faithful fans of L. Frank Baum’s Oz books, the new evil in Oz is loosely based on his work.

The greatest highlight is seeing a fully realized production of The Jitterbug, a song originally written for, then cut from, the Judy Garland film. It is wonderfully used in context here to much delight. The new songs are true to the spirit of the originals, much more fitting in comparison to what Andrew Lloyd Webber did with his recent stage production. Especially great is Dorothy’s new Kansas tune, There’s No Place Like Home. The inclusion of Tom & Jerry never distracts from the main plot or other characters. They add frolic and fun, especially for the young audience, to whom this film is primarily targeted.

There is an option to view the film with Kansas scenes in sepia tone – and in doing so – allowing for a closer-to-the-classic experience. The story does follow the original plot a bit formulaically but works fine. And the climax is sweet – where the ruby slippers, for a moment, seem to rip a page from the script of both The Wiz and Kinky Boots. It’s a charming, cute and fun return to the land we all want to escape to. And thanks to the creative minds at WB, for another near 90 minutes, now we can!

Thanks For Viewing The Tom & Jerry: Back to Oz Review