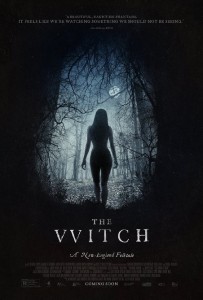 RYAN: I love witches. My love for witches stems from the movies – beginning with my favorite of all time, The Wizard of Oz. Of course there are good and wicked witches in all sorts of stories.  But with the wave of monster movies skewing toward vampires and zombies, we only get a few witchy films. Some of my favorites are Stardust, the Harry Potter movies, Hocus Pocus, The Craft… But there are not an overflow of horror films featuring witches. This one hits the spot. It’s as close to perfect as a movie can be!

CAROLINE: Well there’s a rave, if ever I’ve heard one. And since you love witches so much – are you being biased and generous or were you skeptical and surprised?

RYAN: I had high expectations and they were surpassed. That’s for a few reasons: it takes place in the same era as the true ever of the Salem Witch Trials in the late 1800s New England, it delivers on actually frightening in imagery, tone and story, and the trailer didn’t give anything away. It just set the mood but didn’t reveal anything so the experience in the theater is just exhilarating!

CAROLINE: Sounds terrific, for you. I don’t do hour, but I know you like to actually find a scary movie scary, which is rare, right?

RYAN: Totally! And this is one of the scariest films I’ve seen since Funny Games in 2007.

CAROLINE: Oh Jesus. I’ll never forget that one! We saw it separately but reviewed it together in 2007 and it scared us completely.

RYAN: And scarred us forever! Seriously that one gave me nightmares. I haven’t had trouble sleeping since seeing The Witch but when I think about certain moments, lines, or images, I get really creeped out.

CAROLINE: I just don’t think I could handle it.

RYAN: Oh but it’s so good. The cinematography, the design, costuming – the writing! All the puritanical colloquialisms and language – like “I love thee marvelous well.”

RYAN: I was touched. I love Salem, MA. I’ve visited seven times and look forward to going again someday – this movie, for all of it’s horror and fairy tale quality, has a realness to it. It’s substantive. They got all of the period aspects right – so then where the story goes is just chilling and brilliant. And the cast! I can’t even. They are so perfectly cast – especially the girl – Anya Taylor-Joy. She’s, like, this year’s Alicia Vikander, just a major breakthrough performance in a star-making turn. I expect great things from her. She’s spellbinding.

CAROLINE: Is that pun intended?

RYAN: I don’t to spoilers; so, it’s just cleverness. The tagline for this film is “A New-England Falktale” and there is a dark fairy tale quality to it. Several times throughout the film things I wished would happen, did. Not in a predictable way, but in a satisfying way. And the build up of it is beautiful – it’s not like one of those horror movies where nothing happens till the very end (not to name names, Paranormal Activity). The way the score, editing and cinematography work together is spectacular.

RYAN: The are authentic to the period and were all hand stitched. They also shot in a remote area without cell service or anything. It’s The Crucible meets Hansel & Gretel meets Blair Witch.

CAROLINE: You love it.

RYAN: It’s also very cool how the marketing promotes that The Satanic Temple has endorsed this film. It’s actually quite brilliant – adds a level of crazy and terrifying but also nervous intrigue.

CAROLINE: That is really scary.

CAROLINE: I hear you.

RYAN: Most horror films don’t even screen for critics but I think A24 knows the gem they have here – it’s being so praised for good reason. This is my first top 10 fave movie of 2016. I’m going to see it again with friends this weekend!

Thanks For Viewing The The Witch Review