The Sea of Trees Review 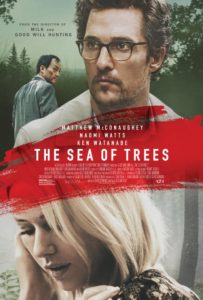 RYAN: This movie kind of snuck up out of nowhere. I wasn’t really aware of it until I was invited to review it as an online screener – which is key because viewing it at home had several implications.

CAROLINE: That, clearly, requires some explanation.

RYAN: Well when you’re watching at home, there are distractions and I know one thing we’ve always agreed upon was that movies are “better on the big screen.”

CAROLINE: That’s true – except for when we’re recommending something as a rental. So how did this one turn out?

RYAN: I was happy to be at home for most of it because I wasn’t that into it. And I’m talking, like, 90% of it. But then the ending is so great that I loved it and then regretted not seeing the whole thing in the theater.

CAROLINE: What an interesting way to look at the film. How can a good ending be so good it actually saves the whole movie?

RYAN: Watching this movie is like a metaphor for hard work – if you stick with it to the end, the pay off can be outstanding.

RYAN: (laughs) Much of the film is confusing to start, but you gather that Matthew McConaughey has traveled to a forest to commit suicide and it’s a popular location to do so. It’s a pretty sad movie and the confusion factor doesn’t make it that enjoyable but then the ending is great.

CAROLINE: Without giving anything away, why?

RYAN: It’s like an upside down fairy tale. The movie feels very pragmatic until the end. There’s the theme of science intersecting with faith; and how they are incongruous.

RYAN: Totally. And the end has a mysticism to it that really spoke to me. The way the story all comes together is very poignant. I was really into it for the last five minutes.

CAROLINE: (laughs) This might be the oddest review you’e ever given.

RYAN: The performances in the forest between Matt and Ken Wantanabe are a bit uneven but I was obsessing over the flashback scenes with Naomi Watts as Matt’s wife. She is so talented it’s crazy.

RYAN: Yes and it’s completely different from anything else he’s ever done. I didn’t see this in the theater but now I want to.

Thanks For Viewing The The Sea of Trees Review