The Salt of the Earth Review 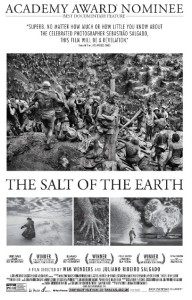 RYAN: This was Oscar nominated for Best Documentary and is now rolling into wider release.  It was basically a passion project for director Wim Wenders, who has done some very weird movies like Don’t Come Knocking, which I only sought out because Fairuza Balk was in it.

CAROLINE: Oh, from The Craft.

RYAN: Yes but I love her from Return to Oz. She was Dorothy.

RYAN: Anyway, Wim is a big fan of this amazing historical photographer Sebastiao Salgado and made this documentary about his career with the help of Sebastiao’s son, Juliano.

CAROLINE: And how was it?

RYAN: Not good.  I can’t believe this got an Oscar nom.  It’s one of the most boring docs ever and it was offensive to my eyes.

CAROLINE: (laughs) How so?

RYAN: There’s a great deal of the film that shows his photos of dead people and dead bodies from a very awful time and I just didn’t have the stomach for it.  I literally sat and covered my eyes.  And then after several minutes, looked and it was still there so I actually walked out to take a break from this imagery.  When I went back in it was still happening so I just peaced-out of there!

CAROLINE: Stop! You left the screening?

RYAN: Yes.  There was only about 20 minutes left but I just couldn’t take it and I’m being honest.  And really much of the rest of the film that shows his photos and tells his story plays just like a slide show or powerpoint presentation.  It didn’t feel like a film to me.  I cannot deny he is stunningly talented as a photographer – he is an artist and deserves this sort of immortalization, but it just wasn’t for me.

CAROLINE: I understand.  It’s been so long since you walked out of a movie though.

RYAN: Remember when we used to walk down the street in NY and point gross things out to each other and react, like, “Thanks a lot.  Why did you make me see that?!”

CAROLINE: Ha! Yes! OMG that was the worst.

RYAN: This movie was like that. Look the pictures are pure genius, but I just couldn’t look them.  They were too real.  I liked that the film is split between English and French with subtitles. Artistically it’s nice that there is a lot of black and white, because that’s what the photos are.

CAROLINE: So there are some merits, but you just really never got into it.

RYAN: This movie takes you on a real journey, it’s like an art history or photojournalism class.  It goes all around the world and covers so many different cultures.  He basically reminisces about his photos.  I just couldn’t take looking at all of the sadness and the people who died of Cholera, etc… this may interest some people but I’m not one of them.

Thanks For Viewing The The Salt of the Earth Review