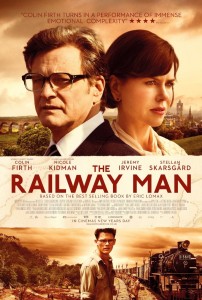 RYAN: I love Nicky Kidman and we haven’t seen her in a while – she wasn’t up for anything last awards season so it’s nice to see her again.  War is the one genre I really struggle with but very rarely, there’s a war movie that surprises me and this is such a case.

CAROLINE: That is indeed a rare occurrence.  What was it about this one that got to you?

RYAN: Well it is still a very difficult to watch, heinous true war story – it’s based on the real life events of WW II Veteran Eric Lomax, played by Colin Firth. But in the end, I enjoyed it.  It’s inspiring and really pushes you to think about how you would handle what he experienced.  It’s super interesting.

CAROLINE: So how were Colin and Nicole in it?

RYAN: Both great – but so is Jeremy Irvine, the boy from War Horse.  He plays a young Colin Firth and he’s wonderful – just a brilliant younger actor.  Nicole is relatively plain but she’s such a chameleon and loses herself in the role.  And Colin has a lot to convey.  He plays a tortured soul and pulled it off – but this just in: they’re all great actors, so I’m happy they met high expectations.

CAROLINE: They are both really good.

RYAN: And the bit of the film that focuses on their romance is just fabulous.  I love their chemistry and they must have had fun working together.  It’s like the movie is a bit of a romantic drama at that moment.  I would have really loved to see the whole movie that way.

CAROLINE: Alas, it is a war story.

RYAN: Tes and the war bits are so so so disturbing! And to know that it actually happened is just mind-blowing and crazy.  It makes me both angry and terrified.  This is the stuff that really scares me; not horror movies, war movies, because they really happened.

CAROLINE: That is stressing and upsetting, for sure.

RYAN: It’s almost like a Holocaust movie at some points.  American solderer was captured by the Japanese and forced into work camps on a railroad, thus The Railway Man.

CAROLINE: Ah, yes.  It all comes together.

RYAN: Ultimately it’s a tale of humanity and shows the worst and the best of what people can achieve – this movie could change you and how you think… it made an impact on me for sure.  I recommend it.

Thanks For Viewing The The Railway Man Review