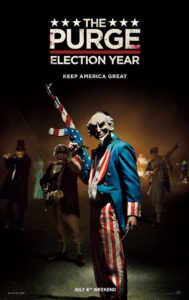 RYAN: I recommended the first Purge movie, said to skip the second one, Anarchy, and so didn’t know what to expect going into this one – but I’m glad to say it’s back on track.

CAROLINE: That’s nice – I haven’t seen, nor would I see any of these movies; I’m not into slasher films.

RYAN: They are brutal. And I have to admit, I’m being very fair giving this a positive review – because it does “work” as a horror film. But it was truly very difficult to watch this movie – all of this civilian violence – in light of recent events around the world.

CAROLINE: Yes it seems like between Orlando, Istanbul and everything else, there’s so much violence, killing and tragedy. It is beyond heartbreaking.

RYAN: Yes we have to mention that. I couldn’t just watch this movie like I did the first one a few years ago. I’m so shaken and upset about the real life horror happening all around us, that this movie – and all it stands for in terms of glorifying violence, bloodshed and murder – that I was sick to my stomach for much of it. I can’t live in that space even for the length of a feature film. But I did – and judging it on it’s theatrical merits, it’s a decent horror film.

CAROLINE: Well that’s very diplomatic of you. Why was it better than the second?

RYAN: Because the second was all over the place and just too much outside. It was gory but not as intense. This one makes you feel a bit more for the characters.

CAROLINE: So this one had a better story?

RYAN: Yes and there is the timelines factor since we are in an election year. They could have gone even more political about it between parties, but they do go after the NRA and their version of the Republican party which is called the NFFA.

CAROLINE: Were you scared?

RYAN: I jumped a bit due to manipulative editing and the film is disturbing. There’s this concept of Murder Tourism in the film where people from other countries come here for the purge night to get their murder on. It’s so gross. The social commentary about killing and guns was at times heavy handed and tough to watch because it rings true. When this franchise launched in 2003, the film’s society was like an alternate, dystopian sci fi version of America – and while it still is, the idea doesn’t seem as far fetched as it was then.

CAROLINE: Yeah that, in of itself, is frightening.

RYAN: I mean, you see characters with, like, bedazzled guns and things. It’s just horrid.

RYAN: Yes I like her. She’s so pretty and the glasses make her look so smart and presidential.

CAROLINE: (laughs) Isn’t that always the case for pretty blondes?

RYAN: It’s a nice return to form for the franchise and most like the last in a trilogy. It’s no Conjuring 2, but what is? If you like slasher violence, it’s good.

Thanks For Viewing The The Purge: Election Year Review