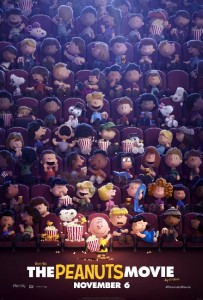 RYAN: After what seems like a lifetime, The Peanuts get their big screen debut with The Peanuts Movie.  Right off the bat, this has felt like a very good idea.  There’s so much nostalgia over generations, culture steeped with iconography, and characters, fables built around American holidays – and just Snoopy in general – all so good for a movie.  And this is classic Peanuts with a very fancy, contemporary look.  The animation is beautiful – the CGI and 3D is incredible but they also used 2D elements in the eyebrows and for a classic, hand drawn comic effect.  It’s actually brilliant how it honors where it comes from but is also entirely modern.  Noah, my 13-year-old nephew joins me for this review.  What did you think?

NOAH: The animation was amazing.  It looked cool.  After seeing these characters on TV my whole life, it was really neat seeing them on the big screen like this.  It’s one of the best animated movies I’ve seen.

RYAN: It’s built on so much familiarity and recognition with these characters.  All of their main personality traits are on display in this film.

NOAH: I thought it was funny and cute.

RYAN: As for the plot, it’s nothing new.  The story basically tells the storylines we already know and have seen in the TV shows.  It’s a bit basic that way and I’m surprised it lacks originality there.  I was hoping for a great, new adventure, but maybe we would get that in a sequel, if this does well.

NOAH: Yeah I felt like I’d seen it in a cartoon that Charlie Brown likes the Little Red Haired Girl and Snoopy goes after the Red Baron.

RYAN: Still – it’s all so marvelous to look at that you can just sink into your seat and enjoy it.  The actors are all new but they matched the classic voices perfectly.  It’s not like how Kermit the frog no longer sounds like the Kermit we knew as kids – similar but different – might be intentional.  But these kids all sound dead-on!  It’s fantastic.

NOAH: They played them really well.  They sounded exactly the same.  My favorite part was the end.  I like how it ends.  I really like Linus and Charlie Brown.  I feel like I can relate to them, especially at school.

RYAN: Kristin Chenoweth voices Fifi, the cute puppy that Snoopy crushes on.  I didn’t recognize her voice but she really doesn’t have much to do.  It’s short.  It’s just an hour and fifteen minutes long.  Stay for the credits because there’s a bit more at the beginning of them that is cute.

NOAH: And I really liked the 3D.  It was cool at the beginning how it starts flat then becomes 3D.

RYAN: Young kids will love it and the adults will experience The Peanuts all over again.  I hope it launches an original story for next time though.

Thanks For Viewing The The Peanuts Movie Review