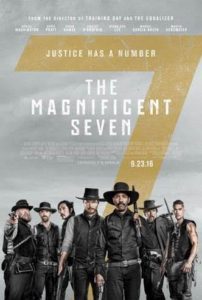 RYAN: This is a remake of the 1960 film starring Yul Brynner which I didn’t see. But this one marvelously epic. It’s shot in a way that looks like Gone with the Wind. There is a majestic, sweeping scope.

CHUCK: The western frontier, if you will.

RYAN: It’s the western to end all westerns. Everything about it feels iconic to the genre in a celebratory way that’s not cheesy. It really goes there. The score made me wanna bounce around in my seat.  It just sounds “western movie.” And there are mountains, cowboys and indians, stand offs, robberies…

RYAN: It’s beautiful. I don’t love westerns and you don’t have to like westerns to get into this because it’s such good storytelling that it doesn’t matter.

CHUCK: It really is great. I also haven’t seen the original. And when I saw they were remaking this, knowing the original was a classic, I wondered why.  It is an iconic film that many have emotional connection to. But then Denzel and Chris Pratt were cast and it far exceeded my expectations. It’s, like, a fantasy wild west movie. Great story with great characters.

RYAN: They are all specific types – even a role like the one played by the brilliant Vincent D’Onofrio, which could have been very weird and corny, because he played toyed with such a highly stylized and nuanced voice – but he was so committed and present in it, living the role, that it worked. And there is comedy in this film – from both dialogue and delivery.

CHUCK: Absolutely. I was hesitant when Vincent first started talking but then he really made that awkward voice work.

RYAN: And Denzel! He has some power shots in this film. He’s made to look like a superhero in this movie.

RYAN: There were also some shots that looked 3D even though this movie is not in 3D. I’ve never thought that before.

CHUCK: There was some really amazing depth perception happening. I noticed that too. And we saw this on IMAX.

RYAN: How did they do that?

CHUCK: But there were also some closeups that were a bit fuzzy. Unacceptable. But the rest of the movie was so fantastic.

RYAN: It is a sign of the times. They play the authenticity of this time in America, dealing with the different cultures and races, but still not as bad as it probably was back then. And let’s talk about Haley Bennett. She’s a great actress who is breaking through this year with this film and the upcoming The Girl on the Train.

CHUCK: She was very good too.

RYAN: This is a big movie.

CHUCK: It was almost like a period thriller more than a western. The pacing was so good and it just happened to take place in the wild west. The story was so good. The cinematography was lush.

RYAN: It did everything it was supposed to do. It told a story and served the genre – if you’re gonna make a western, this is how to do it. It’s the standard.

CHUCK: And it was great seeing Ethan Hawke and Denzel back on screen together; so great in Training Day. And if anyone was questioning whether Chris Pratt has legs, he does.

RYAN: I didn’t see his legs.

CHUCK: (laughs) You know what I mean.

RYAN:  I’d like to see him do a straightforward drama though. He’s still funny in this. It really plays to his strengths.

CHUCK: He is capable to anything and I’m sure he’ll do that but let him ride his strengths.

CHUCK: Evil as hell. He is getting a bit pigeonholed.

RYAN: He plays smarmy so brilliantly.

CHUCK: You love to hate him. And he’s probably the sweetest guy in real life. This should have been a big summer movie yet here it is in September.

RYAN: I’m very impressed. I loved it in the theater.

Thanks For Viewing The The Magnificent Seven Review