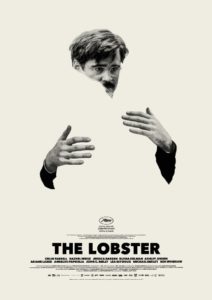 RYAN: This is a new comedy that’s really an experimental/absurdist type of film and among those I’ve seen, it’s gotta be my fave. It’s not unwatchable. It’s weird with a sci fi bent. It’s an alternate reality where single people are forced to couple up in 45 days or be transformed into the animal of their choice. The pressure is intense and you feel uneasy. I laughed a bit but then it turns a corner for tragedy and I was so sad at the end.

TINA: Some people chose not to couple up and opted to become animals. You’d think if that was your option, you’d just grab whoever was next to you and couple up.

RYAN: Crazy and in a society where animals have no more respect than they do now. You could still be hunted or killed. It’s horrible. What an interesting concept.

TINA: It is interesting but I’m still trying to figure out all the different groups in the movie.

RYAN: You kind of have to let go of the why – Why did the world become this way? Is it just one random place or the whole of the world? It’s strange. It’s not like people instantly combust into animals – they go through a procedure to turn into one. It’s induced in a twisty society. So harsh.

TINA: But we saw the parents of one character and they seemed completely normal.

RYAN: Yeah it’s a layered story. The score is incredible too. Some scene that may have been LOL funny were made uncomfy because the music was like what you’d hear in a horror movie.

TINA: Very dramatic.  And there are some difficult themes in this film.

RYAN: Oh yeah. There’s cruelty toward animals, which is never easy to watch. There’s violence – I don’t wanna reveal too much. I love Colin Farrell in it. But this is not the typical mainstream movie.

TINA: The whole movie is not for a mainstream audience. But you don’t necessarily have to enjoy it – it makes you think. We walked out and we’re still thinking about it and wanting to talk about it. Even over the next few days, remembering it will make me wonder.

RYAN: It’s comedy but I was horrified at parts – disturbed. I felt sick, angry at times. I would totally tell my friends to see this because it’s absurd, atypical and unique. I was entertained.

TINA: I don’t like horror movies but there was parts that were like a horror film but I didn’t mind watching it.

RYAN: I love Rachel Weisz. She primarily narrates the film and I was actually worried we wouldn’t get to see her but then she is in there.

RYAN: Colin seemed to pack on some pounds for this role.  There’s also Ben Whishaw and John C. Reilly.

TINA: It’s an amazing ending. I loved it. I was disgusted by some of the scenes but I’m glad I saw it.

RYAN: It’s a weird movie, not for everyone. It’s good storytelling and well done. It has one of those open-end endings that leaves amazing room for speculation and discussion about what happened and that’s always fun with friends.

Thanks For Viewing The The Lobster Review