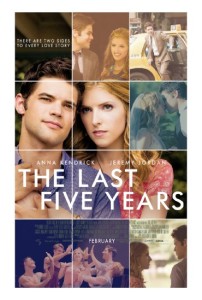 RYAN: Musicals are one of my favorite genres and I’m loving how Anna Kendrick is emerging as a modern movie musical star!  This is a great showcase for her voice and her depth as an actress.

CAROLINE: God do you remember the first movie we saw her in?  The musical Camp… she was a scene stealer even then.

RYAN: Of course I remember!  She has the it factor… and then some.  And she looks great with lighter locks in this movie too.

CAROLINE: And the dude is Jeremy Jordan from TV’s Smash.

RYAN: He was also in the Broadway musical Newsies.  I liked him so much more in this movie.  He irritated me in Smash.  But the songs are better in this.  It sounds more along the lines of RENT than anything else I can think to compare it to.  They’re not the standard showtunes, but melodic, story-driven pop songs.  It’s great music; just very fun to listen to.

CAROLINE: It’s really just the two of them in this, right?

RYAN: There are background people but yes, this focuses on their relationship over five years.  It’s interesting because his songs tell their story from the start to the end and her perspective works backward.  It’s sort of odd but I knew that going in, so it helps.

RYAN: When you’re wise to it, it’s actually cool.  It’s a character study about falling in and out of love.  And there are so many issues and themes you can relate to whether you’ve experienced the same thing or not.  It really holds the magnifying glass up to the beats of a relationship – the intensity and excitement at the start, all the hopes and plans and good intensions… and then, of course, the pain of it all falling apart and ending.

CAROLINE: Yeah it can be brutal.

RYAN: They really got the tone just right.  It’s dramatic but never overly-so or cheesy.  For all that it’s sung, the acting through the singing is so strong, it’s really a unique and special movie.

Thanks For Viewing The The Last Five Years Review