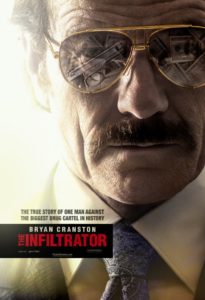 RYAN: This is a new crime drama about an undercover cop infiltrating a drug cartel, money launderer, based on a true story from the mid-80s in Tampa, Florida. It’s shocking and horrifying the amount of drug money filtered through our country and the way that banks are involved too. The drug biz is so large around the world – it’s maddening and saddening. The movie is good – the lighting is phenomenal. It’s one of the best lit movies I’ve ever seen. It’s good to the point you actually notice it.

CHUCK: The use of color lights was very cool.

RYAN: It felt a bit like a TV movie for the first half. That’s not really an insult. TV has gotten so good in the last few years. But then I really got hooked halfway through and to the end.

CHUCK: There is a lot of set up, for like the first third. So it is kind of slower to start. We needed to know who these people are and set the stage for what’s to come. And it’s a huge cast of characters with as great cast. The movie does a great job at filling out all of these different characters. The direction, editing – it’s all really good.

RYAN: The scenic design is terrific. It’s not overly stylized; but actually more realistically styled. There’s the money, the jewelry, the expensive apartments – all very stylish but not over the top like some movies.

CHUCK: It nailed the 80s. Every detail was very on point. The acting was outstanding.

RYAN: I was most excited to see Jason Isaacs, but he has the tiniest role. He has barely any lines and I wanted him to have more of a role, but it was still cool seeing him.

CHUCK: His role was important though.

RYAN: Diane Kruger won me over but in her first scene I couldn’t tell whether she was playing an American. Her accent was so weak. But then she was clearly playing American and it improved but that’s always annoying when an accent isn’t perfect.

CHUCK: She did sound European. She is fantastic though. Amy Ryan was so good.

CHUCK: And Bryan Cranston, of course is just… he nails it. And it’s a complicated, layered character who snaps within scenes, based on what is called for his character.

RYAN: Really good and also John Leguizamo, also amazes, and they had some confrontational moments together that just ignited the screen.

CHUCK: This definitely sheds a light on what the drug scene was like in this country in the 80s and it’s probably as bad today but with other substances.

RYAN: It’s dangerous. This movie is gritty. You fear for the safety of these cops. There are times it’s suspenseful but it’s not edge of your seat.

RYAN: It’s also 20 minutes too long. I even thought it was too long at one point.

CHUCK: But it is based on a true story – and it’s produced by the guy that Bryan plays in the movie. It’s based on his book.

RYAN: What an experience really. It’s a smart film – you never question who’s good or bad but you feel for all sides. It’s a bit hard to follow at times, but a good movie.

Thanks For Viewing The The Infiltrator Review