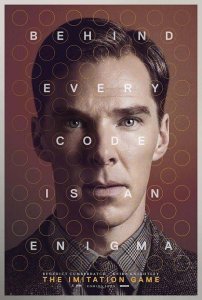 RYAN: Thuis movie features my favorite acting performance of the year – Benedict Cumberbatch as Alan Turning who history books omit but he is singlehandedly responsible for 1) creating the world’s first computer and 2) shortening the duration of World War II by at least two years, in effect saving millions of lives.

CHUCK: You’re right his is a story nobody really heard until recent years when information became declassified and the British government acknowledged his involvement in one of World War II’s most top secret projects.  So it makes sense we didn’t’ learn about him.

RYAN: He is a war hero.  He was gay, one of the true gay heroes of history.

CHUCK: It made me feel really anxious, wondering what was going to happen.

CHUCK: Real intensity with a lot at stake.

RYAN: Lives at stake, world peace.  Here’s the thing, I don’t like war movies.  I’m always on the record saying that but there are many coming out this month and I like them all and because of that I really can’t say I don’t like war movies anymore.  This is a war movie, but it’s more about one man’s story and involvement in ending the war.

CHUCK: Half of the war doesn’t happen on the battlefield.  It happens back home; not to take away from those on the front lines.  But in this situation, Germany had The Enigma Machine that sent coded messages containing info that would help the allies defeat them.  Alan cracked the enigma code.

RYAN: I’m blown away by Benedict in this – he plays a genius mathematician and as is often the case with genius, he’s social awkward.  He embodies this role heart and soul – physically, emotionally.  It’s all there.  He plays the social awkwardness so perfectly.  I’ve been on dates with people like that.

CHUCK: (laughs) He definitely played it like he has Asperger’s or autistic or something.  He was captivating.  Even his slight stutter was so nuanced and good.

RYAN: Keira Knightley is someone I don’t always love but I’ve really enjoyed her recent performances and this is a good role for her – she brings a great feminine, wise, compassionate energy to this movie.

CHUCK: Agreed.  She’s very strong and they have wonderful chemistry.

RYAN: And a unique chemistry.

CHUCK: I love how the movie unfolds.  There are flashback, the current story and the post-war.

RYAN: It’s such a strong screenplay.  I was heartbroken by the flashbacks and how he was bullied as a child.  But how good is Mark Strong? I love, love him.  He’s one of my favorite actors ever.

CHUCK: It took me a moment to recognize him.

CHUCK: The makeup and hair.  He was great.  Matthew Goode was also really good.  The production value and transporting us back to that era England was terrific.

RYAN: Unlike The Theory of Everything, Unbroken, Selma, Wild, Big Eyes – other movies this year basked on true stories about real people – there’s some inspiration at the end but this one is more depressing.  I’m horrified by what happened to him.

CHUCK: Well there are three theories out there about what happens to him at the end.  Who knows where the truth lies.

RYAN: So frustrating.  Horrifying when he should have been celebrated.

RYAN: Disgusting.  But this movie really honors his legacy. It’s so important to get his story out there.

CHUCK: Not only for LGBT history but for world history.  It’s crazy what had to happen in order to take down the Nazi regime.  We didn’t enter the war until 1941.  This movie starts three years before that.  England was involved.

RYAN: I wish they would show this movie in schools.  It’s an education and it’s not that long ago.

CHUCK: Someone who saved the war received no thanks, no medal.

RYAN: It’s one of the best made and simply best films of the year – worthy of Best Picture, Actor, Director and more.  See it.

Thanks For Viewing The The Imitation Game Review