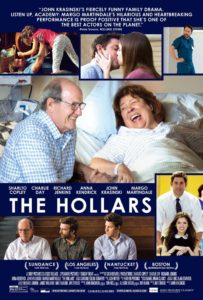 RYAN: This is a new dramedy directed by and starring John Krasinski. It features one of the best ensemble casts I’ve ever seen. It’s so perfectly balanced between the drama and comedy – and several are like that – but this is the first one wherein I’ve ever been able to simultaneously be sad/crying and happy/smiling – at the same time! It’s not a roller coaster – you’re feeling it all at once. I’ve never experienced that before. Each character gets the right amount of time. It’s brilliantly cast – Margo Martingale, Richard Jenkins, Sharlto Copley, Anna Kendrick, Josh Groben, even! Everyone is fantastic. I loved it.

NATHEN: I thought it was great, too. You can definitely buy into this family and who these people are. Their dynamic was so familiar, unique and still familiar. In the situation they’re put into and how they all deal with the stress in their lives, you can either see how you would or wouldn’t deal with it in comparison.

RYAN: It’s very relatable. They’re dealing with some of the most difficult, challenging experiences anyone can have and even some of the most awkward things that happen which are so excellent but sad to watch, and you still find yourself giggling at it all. There is anger with comedy to it. It’s so fun to watch.

NATHEN: They’re not laughing, but we are. My overall takeaway is just how real they all are in their roles. You really believe them in every instance and moment. It’s so genuine and natural.

RYAN: It’s because the writing and performances are both spot on. I can’t decide which is greater – the script or the casting – both are perfection.

NATHEN: You and I both love Anna Kendrick as a favorite actress and seeing her in this was so fun. And it’s creative how each character has his or her own issues but they all come together as a family.

RYAN: Right – it all feels very organic – you don’t really feel the difference between major versus subplots and that can’t be easy to do.  And I loved John – as an actor and director – you see so much in his face… confusion, anger, fear, it’s all there even without dialogue. His character arc, in an hour and forty-five minutes is amazing.

NATHEN: Right. It’s almost like you could turn the sound off and just read the story based on their facial expressions.

RYAN: Margo was really good. Her character’s relationships were very profound and then the relationship between the two brothers – their lack of relating to each other and how different they are was very real and challenging. Themes of family, love life – all play out so well.

NATHEN: And Margo was really able to bring a lightheartedness to all the dark that was occurring with them as a family. You go down and she pulls you back up and that’s real how that happens with parents in real life.

RYAN: And I loved the horribly awkward moments between John and Charlie Day – I totally identified with that. I experience things in totally different situations but with the same dynamic all the time. I loved seeing that in this movie. It’s all dealt with such great comedy but also realism.

NATHEN: You buy it all hook, line and sinker even though there are some quirky people.

RYAN: You just switch from the lowest of points in life to the highest, so quickly yet so naturally – it’s amazing how this film cleverly accomplishes it. Again, that can’t have been easy and it’s so brilliantly done. So good. I loved it. It’s a wonderful smaller film that’s absolutely still worth seeing on the big screen.

Thanks For Viewing The The Hollars Review