The Edge of Seventeen Review 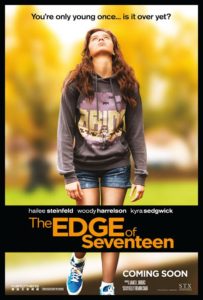 RYAN: I wasn’t prepared going into this film for how great it was going to be. It’s really a spectacular movie. And it takes a bold movie to open against Fantastic Beasts this weekend, this one is worthy. Granted it is an entirely different genre – this is a dramedy. But it’s the best teen movie since The Perks of Being a Wallflower. And it’s like a modern day, edgier John Hughes film. It’s like Heathers meets Sixteen Candles.

CAROLINE: OMG I love it. I feel like i need to see this immediately.

RYAN: Yes, you do. You will love, without a doubt. And this movie has made me an uber-fan of Hailee Steinfeld. It’s such an humungous. sassy role for an actress of any age and she just sails with it. I was in awe of her in this movie. I interviewed her recently for this and she was fabulous.

CAROLINE: She was nominated at 14 for her role in True Grit.

RYAN: Yes. She’s one of my faves now. I love her costumes in this. It tells a story of the character too. Even in the first scene, you get who she is, based on her outfit. And the opening line is juicy.  The role is so unique. She’s an unhappy person but really mature in how she relates to adults. It’s just one of the best coming-of-age movies I’ve ever seen.

RYAN: OMG. Kyra Sedgwick as her mom is out of control good. She’s another character whose makeup and hair really are telling. I love her. And then Woody Harrelson is as great as ever. His banter with Hailee is classic! I also love Hayden Szeto in this. It’s long overdue have an Asian actor in a great role like his.

RYAN: I was surprised how relatable this movie is. I’m a single 42 year old gay man and I was feeling everything this teenaged high schooler is feeling. And I have to tell you – this is the first movie I’ve cried in, in years.

CAROLINE: What?! You never cry in movies.

RYAN: This movie really grabbed me. I think you will too.

CAROLINE: Oh I do all the time!

RYAN: It’s hard because she doesn’t necessarily make bad choices, but bad things happen to her and you really feel for her. All the angst, anxiety, and hope is played so well. This is a gem. It’s a special movie and the kind you’ll watch anytime you’re flipping through the channels and catch it on. But it’s also great seeing in the theatre!

Thanks For Viewing The The Edge of Seventeen Review