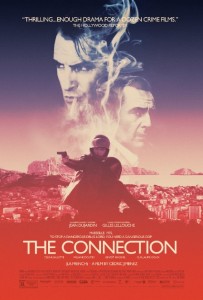 RYAN: This is a new action/crime drama starring Jean Dujardin – the best actor Oscar winner for The Artist in 2011.  It’s in French with subtitles and it’s fantastic!

CAROLINE: Oui, I bet it is.

RYAN: I love French but that’s beside the point.  This is such a juicy story, loosely based on the true events of The French Connection heroin smuggling scandal in the 70s.

CAROLINE: There was also an American film about it starring Gene Hackman in 1971.

RYAN: Yes it won best picture.  I never saw that one but this one is gritty, intense and suspenseful.  It grabs you at the start and really holds onto you.  It’s such a showdown between good and evil; a power struggle between the law and the lawless.

CAROLINE: How is Jean?

RYAN: Great.  I’ve always liked him and he’s very slick, cool and believable in this.  There’s so much corruption in the story and although it’s slightly over two hours, the plot moves very well.  There’s also something to be said for foreign films.  It’s always interesting to see a genre film and how it’s handled a bit differently – maybe in the editing.  But I found some influences of Coppola and Scorsese in this movie.

CAROLINE: That’s quite the compliment.

RYAN: It’s deserving.  And I learned a new word – thugocracy.  It’s sort of self explanatory.

CAROLINE: Ooh I like it.  I would totally see this.

RYAN: It’s worth it.

Thanks For Viewing The The Connection Review