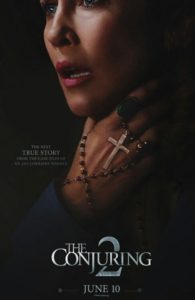 RYAN: Wow! I am blown away by this movie! It’s my new favorite horror movie. It’s so well made, exquisitely crafted, beautifully cinematic – some shots were reminiscent of Robert Zemeckis, my favorite director. This is directed by James Wan who has already established himself as an auteur of horror – but with this he is a top notch director. The craftsmanship elevates the genre – it’s shot like an Oscar caliber drama. I was awestruck by the cinematography, design and art direction.

BECKY: All of the camera angles, movement and length – one single shot in particular, comes to mind – so artistic and cool.

RYAN: It was almost like a shot, out of Bridman.

BECKY: It was intricate, weird and maze like. Incredible.

RYAN: The coloration of the film – from the costume, music, sets, hair – you are transported back to the 70s.

BECKY: It was beautiful and elegant. It was so scary.

RYAN: We agree. We both like to be scared in a horror film but careful what you wish for here because it’s actually really scary.  There was one time, I was so scared, I almost started crying – fear tears. I’ve never experienced that before.

BECKY: I was scared but I could even feel how scared you were, just sitting next to you. This is fun to see with an audience. I was so taken into it. I was so terrified at points, that I was hoping it wouldn’t happen.

RYAN: And there was a recovery period. At one point, I almost had to catch my breath. It was almost scarier than you want it to be. I’m freaked out by the images and how well they used shadows. We also talked before the movie about the pet peeve of inappropriate audience laughter at a horror film (because it breaks the tension if  you’re feeling it) – but with every seat filled in this screening, no one laughed. It was awesome.

BECKY: I was so tense, my neck and everything was held during the movie.

RYAN: There are multiple “monsters” in this film which adds to its unpredictability. Each it creepy in its own way.

BECKY: And you have to see it to find out, but you never know where the next terror will come from.

RYAN: It’s a nice mix of CGI and practical effects. And the way music is used is twisted too – there are nursery rhymes that harken back to Nightmare on Elm Street.

RYAN: There is faith interplay, as with most exorcism stories but it’s not too heavy handed. And there’s the thread of reality woven through since these characters were real people, and this stuff was documented – even starting with the brilliant first scene which takes us back to the Amityville Horror. That really sets the tone perfectly.

BECKY: I’m intrigued by these characters. I want to research them and find out the what was the truth and what was fictionalized from the film.

RYAN: I’m sure it’s 90 percent fictionalized but to wonderful effect!

BECKY: And there’s a palpable romance subplot between the Warrens – Patrick Wilson and Vera Farmiga. I felt it an believed it.

RYAN: I love him – ever since Broadway and they gave him a song. He has a musical moment – it’s sweet, creepy and and brings out their chemistry. I loved it so much and can’t recall another musical moment in a horror movie.

BECKY: He’s beautiful in his voice and intent.

RYAN: It’s The Conjuring: The Musical.

RYAN: But having that layer of romance without being cheesy really brings more depth to the whole experience. I just love this movie.

BECKY: I love them in these roles. It’s not campy. It’s so wonderfully done. It could have gone any way and this was awesome.

RYAN: Most horror movies are wasted and this was so excellent as a film – it should be studied in a film class. Even little Madison Wolfe, as the little girl, was so good. It’s not the scariest movie I’ve ever seen but it is terrifying and it’s just the best made – it’s so good. Even if you don’t like horror films, you should see this because of how well made it is. It’s outstanding.

Thanks For Viewing The The Conjuring 2 Review