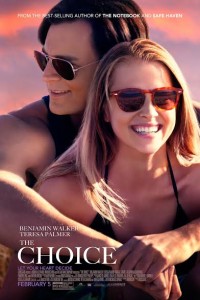 RYAN: Just looking at the poster and the name Nicholas Sparks was enough to lower my expectations for this movie. But I’m surprised and happy to say this is the best N Sparks film since The Notebook!

CAROLINE: You’re kidding! They’ve all been so mediocre since that one.

RYAN: The Notebook is not only the best of his adapted stories but really the gold standard for romantic drama. And now The Choice is an enjoyable one as well, The chemistry between Ben Walker and Teresa Palmer is phenomenal. It’s like you want them to be a couple in real life, as was the case for Ryan Gosling and Rachel McAdams. They look and fit so well together.

CAROLINE: That has to be one of the best compliments to a casting director.

RYAN: I wasn’t that familiar with Ben, aside from Abraham Lincoln: Vampire Hunter. He does a nice job and has a great southern accent, at times sounds as though he’s doing his best Matthew McConaughey impression.

CAROLINE: (laughs) I can only imagine that wasn’t his goal.

RYAN: And Teresa is a breath of fresh air. I’ve seen her in many things but she’s so good in this – she’s so real and seems like someone you’d have grown up knowing. She’s grounded and nuanced and fully builds this character.  The downside of this movie is it’s at times cheesy, but she keeps it very real. For all that their chemistry is palpable, she really is the heart of this film.

RYAN: Good. Tom Wilkinson and Maggie Grace are both good in it. Maggie is a little flat but doesn’t have much to do as Ben’s sister.

CAROLINE: I always liked her, since TV’s LOST.

RYAN: The setting for this film is gorgeous – much of it on or near the water – and there’s even a moment that is reminiscent of the water/boat scene in The Notebook. It’s different but a visual reference. And I love the subplot with the characters’ pets. This is a movie for dog people.

CAROLINE: They’re vets or something?

RYAN: Ben plays a vet and she’s a med student. I will say part of why I liked this movie so much is because I avoided the commercials and trailers. I heard they give away major turning points in the story. People who read the novel will obviously know what’s coming, but for someone like me, I found the film had more impact not knowing what to expect. I love the romance in this – it’s very authentic and seeing two people fall for each other in a complicated situation is very cool to watch.

CAROLINE: You said the downfall was that it’s cheesy?

RYAN: Yes a bit sappy at times but it didn’t really irk me.  The soundtrack, on the other hand, is horrendous! Every time a song came on, with lyrics, I cringed. It was, like, super low budge sounding and took the whole production value down a notch. I lit’rally tried to tune it out, pun intended.

RYAN: But this movie is great. It’s a chick flick, sure, but the best Nicholas Sparks since The Notebook and quite enjoyable.

Thanks For Viewing The The Choice Review