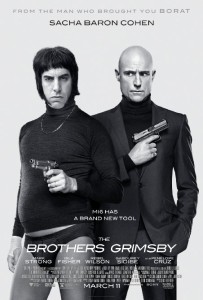 RYAN: This movie is horrible. One of the worst I’ve seen in years.

CHUCK: It’s one of the worst I’ve seen in my entire life. Sacha Baron Cohen is an acquired taste – but I found moments of his previous films funny, while nothing in this film was in the least.

RYAN: His character work is very good and he comes up with another original one here but it doesn’t fit. First of all, this movie is not a comedy. Sure, they’re desperately going for the non-PC and shock humor, but it’s completely unfunny. It’s really 85% an action movie – and at that, not good either! It’s two different genres that do not blend – the comedy and action never work together.

RYAN: It’s not funny. It’s offensive. I’m all for non-PC humor when it works and there’s an art to it when you find something inappropriate and you laugh but all falls flat here. It’s gross for the sake of being gross – pushing things as far as you can – I think even Ben Stiller, Will Ferrell and Sarah Silverman would cringe watching this movie.

CHUCK: Right. There’s no humor or inventive quality to any of it.

CHUCK: It’s so low brow and such juvenile comedy but juveniles can’t see this movie. It’s rated R. It tries to be an offensive Pink Panther – going for a spy movie.

RYAN: The action isn’t good. I’d love to be able to say that the action was well done and this could maybe be a rental but it’s so poorly shot and edited that you can barely see what’s happening. It’s awful.

CHUCK: I feel like I need to go home and watch Citizen Kane to absolve myself of seeing this.

RYAN: You want to, like, cleanse your soul and ironically, I didn’t feel that way after watching The Witch.

CHUCK: Some will find this movie funny.

RYAN: There’s an audience for everything but this didn’t work for us.

CHUCK: How did Mark Strong get involved?

RYAN: I love him but his part wasn’t even funny. And Isla Fisher – it’s like seeing Christine Taylor in a Ben Stiller movie.

RYAN: Not even funny. They just exploit her for being fat. Rude.

RYAN: None of it worked. And for only being an hour and 20 minutes long, it still somehow felt like four hours. Save yourselves and avoid at all costs.

Thanks For Viewing The The Brothers Grimsby Review