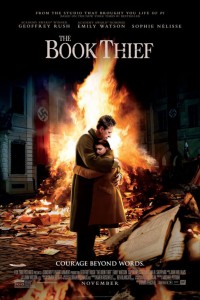 RYAN: This is a horribly tragic Holocaust movie that exemplifies the reason why I hate Holocaust movies. It’s not the worst of them since it’s not as brutal and graphic with concentration camps, like Schindler’s List, but it’s still as terrifying and I have a very low threshold for tolerating the subject.  It’s such a break from humanity that really happened.  At the same time, this film is beautifully done.

CHUCK: It’s from an interesting perspective, covering seven years of the war and around the time Hitler was named Time magazine’s Man of the Year – before America and the world woke up to the reality of the insanity.  And this is from a family’s perspective who were not fans of Hitler.

RYAN: It’s about a family in Germany hiding a Jew during the Holocaust, of which there were many during the war.  This isn’t a true story, but based on a popular book.  I just hate going to that world for a couple hours.  But it’s a unique movie with a bit of romance to it and shot from a lower perspective.  You’re at the level of the young girl’s eyes for most of the film.  It puts you on edge but also helps you see her world the way she sees it.

CHUCK: That’s so interesting.  I didn’t pick up on that but you’re totally right.

RYAN: She’s learning to read but also learning about the world she lives in.  It was such a terrifying time to live through.  There are many tragedies people live through in life but acts of war inflicted by people just make it hard to handle.  It shouldn’t have happened.

CHUCK: And there were people who were turning a blind eye to what was going on.  This is a story of a family that did what they could.

RYAN: This is based on a popular novel but how do people enjoy this kind of story as entertainment?  I mean, some of the moments were certainly entertaining, but just when you have the choice between going to this world for a couple hours, versus Frozen, I don’t really see it as a contest.

CHUCK: It’s an important movie for everyone to see though.  I agree with you; but, I think the point of the movie is that life goes on.  Tragedies happen in life, injustices, loss and we have to go on.  There were moments when the audience laughed and it’s hard to take in the context of a Jew hiding during the Holocaust, but there were those moments of levity.

CHUCK: Sometimes you’re in the middle of Hell and you still need moments of joy.

RYAN: That really is the ultimate theme of the film.

CHUCK: But I agree with you, I’d rather go back and see Gravity or Frozen again than this one.

RYAN: In some ways, both this movie and Gravity and Dallas Buyers Club and 12 Years a Slave – almost every movie out right now could make an argument that it’s centrally about survival.  Meanwhilst, Geoffrey Rush was so good in this movie.  He’s such a great actor.

RYAN: Their German accents were phenomenal.

CHUCK: Can we talk about the two kids? I mean…

CHUCK: They were such good actors too.

CHUCK: At multiple points it is tough.

RYAN: Compared to Schindler’s List, or Inglourious Basterds, as far as Holocaust movies go, this one is more palatable. It’s ultimately as tragic, but a bit more calm.  Actually, because I’ve seen those movies prior to this, I was always on edge during this movie, waiting for things to hit the fan even when they didn’t, you know?

RYAN: The narrator in the film is a bit of a turn off – interesting choice but off putting.

CHUCK: Yes I was confused a bit by the narrator.  This movie is going to be accessible to a younger generation though, because it’s not as violent or graphic as those other movies.  This movie can be a good stepping stone to the chapter in history.

RYAN: It’s still a beautiful movie that’s very artfully done.  It’s an important story.  There is a Jewish philosophy of “never forget,” which basically means it’s appropriate to remember, revisit, and honor those we lost in the Holocaust so that it never happens again.  This movie is one beautiful way to never forget.

Thanks For Viewing The The Book Thief Review