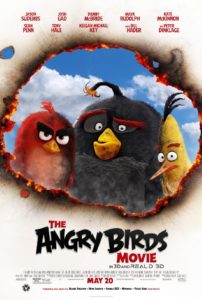 RYAN: I had zero interest in this film so went in with very low expectations going into this film. Of course I’ve played Angry Birds. Who hasn’t? But I never got into it as much as Candy Crush, Tetris, Unblock Me… Some app games are addictive and apparently they can now spawn a movie. What are the other games? Draw Something, Words with Friends…

CHUCK: That would make a great movie.

RYAN: (laughs) I just wanted to be entertained. Please. That’s all I ever ask for. And the voice cast here couldn’t be better. But this movie is just basic, simple and barely even cute.

CHUCK: I play the game and thought there was great potential for a fun story. I was actually looking forward to this going into the screening with you. But you’re right. There really wasn’t much to the plot. It seemed the entire point of the movie was to include as many pigs/birds/ham/egg puns as possible into a movie. Everything came fast.

RYAN: And we didn’t laugh. And with all that vocal talent, they were not used well. Aside from Jason Sudeikis, whom I am starting to burn out on.

CHUCK: There is a lot of Jason Sudeikis lately.

RYAN: He, Josh Gad and Bill Hader were the only I could recognize. I was annoyed. The plot is so basic. It begins similar to Shrek or The Grinch. There’s an outcast character, but it doesn’t go anywhere. There’s no message in this film. Disney has been on a streak of brilliance lately with their films and then a family film like this comes out and it’s not even good enough for mindless watching.

CHUCK: I love a good, simple movie. That’s ok with me but what was the point of this? Just to get to the part in the film where we get to see the birds do what they do in the game?

RYAN: That’s the bare bit of joy one might get out of this is when you recognize any familiarity with the game. And that’s what’s supposed to thrill you and get you into the theater? No.

CHUCK: And the biggest laugh in the theater was bodily fluid jokes. It panders to the lowest common denominator. There’s nothing wrong with elementary school humor.

RYAN: It’s not for everybody. And as far as the 3D goes – this was created in 3D but it wasn’t even as good as some of the more recent 3D conversion we’ve seen.

CHUCK: It’s bright and the animation is ok.

RYAN: But not on par with what we see by the big studios.

CHUCK: This is the company’s first outing, though. It’s the same company that created the game.

CHUCK: Yeah but it clearly needed a better story and a message. The setting was odd to me – it starts out looking like a small island but then turns into a huge place.

RYAN: To the tiny birds it seems bigger.

CHUCK: That was bad. It was a waste of the voice cast.

RYAN: It wasn’t the worst movie you’d ever see and the very young will like it but it’s not as palatable for anyone over 10.

Thanks For Viewing The The Angry Birds Movie Review