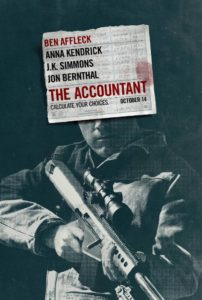 RYAN: Ben Affleck’s latest is a crime drama/thriller and I found it interesting because it’s a thinly veiled superhero film. He is Batman, He’s been Daredevil. He’s now playing an accountant with special skills based on the fact he’s autistic. This film makes autism a superpower – in a way. Well that and the fact his father forced special training on him as a child. There’s a school there that reminded me of X-Men. I just saw a lot of influences here. Or maybe because we’ve been so oversaturated with superhero movies I can’t help but find this one derivative.

NATHEN: There’s the spectrum of autism and he’s on it and he did a really good job in portraying the specific challenges as an adult with autism.

RYAN: It’s turned into a strength here. I really wasn’t that invested in the movie until Anna Kendrick enters. She breathes fresh life into the film that is kind of a downer. She brightens it up. My favorite moments in the film are between the two of them. Their chemistry is movie magic. I wish there was more of her in this. He’s socially awkward and she’s a nerd and it’s an oddly perfect pairing.

NATHEN: Yeah they definitely have amazing chemistry. I saw it differently in the beginning – I really enjoyed all of the flashbacks to Ben’s character’s youth which gives insight into his life. It makes him more relatable as a character.

RYAN: I just found that all very derivative, again, of the typical superhero character because they have traumatic childhoods, ala Batman. This one just makes it more grounded.

NATHEN: That’s the point. It’s not fantasized here. It’s not magical or super. He’s a hero but not a superhero. He’s a person who could actually be doing these things, based on this situation. Everything seemed realistic. It was also cool to see how a disability can be embraced as a skill set was cool. I see it more as an anti-superhero. Not everything he does is good.

RYAN: Ok. Fair. There is a theme of revenge here. One of the things we do have to give it credit for is that this movie does handle autism in a good way. It covers how there wasn’t a diagnosis or set way of approaching it decades ago. But that there is a way to work with these children so they can contribute and actively have more fulfilling lives. This movie does use that perception to tell the story.

NATHEN: And I liked how this movie goes full circle – without giving away spoilers.

RYAN: I missed some of that.

NATHEN: It’s a puzzle. The whole movie is a puzzle. I really loved this movie.

RYAN: It is. And they literally have a puzzle in there so we’re really supposed to pick up on that. It is smart that way.

NATHEN: It’s a pretty well rounded film. I didn’t find it over the top – it was all believable to me. I also think the movie poses the question “Who’s really disabled here?” Is it the people with autism or are they just a minority who are actually better focused than we are? Temple Grandin

RYAN: I normally love action movies when they do something that hasn’t been seen before. There’s not very original or different here. It’s solid but average. Nothing really impressed me aside from one lunch scene between Ben and Anna that made me just wish it was a rom com instead.

Thanks For Viewing The The Accountant Review