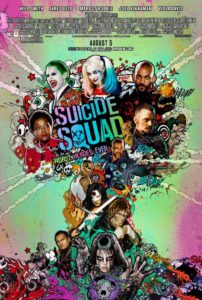 RYAN: It’s DC’s big hope for their superhero franchise. Marvel has universally won praise from audiences and critics and even though the DC movies do well, they’re still not considered a success in comparison. And audiences have been pretty vocal about feeling disappointment in them. I didn’t like Suicide Squad as much as Batman v Superman, which I was already in the minority liking. But I did enjoy it as a kind of B side to the DC set up.

MICHAEL: Well that’s exactly what this. It’s basically DC’s answer to Marvel’s Guardians of the Galaxy, where they take a bunch of B characters and give them their own movie, in this case, B villains.

RYAN: I’m glad to have Michael Weiss join me in this review – you’re into Batman the way I am into The Wizard of Oz, so I appreciate your two cents, as it were.

MICHAEL: Thanks – I’d have been offended if you reviewed this with anybody else.

RYAN: I just have to get this out of the way, that these characters – even though they’re set in a comic book universe – they’re domestic terrorists and in light of real world events, I’m still uncomfy seeing all the gun violence.

MICHAEL: Well only a couple of these characters are killers, they’re mostly thieves and other criminals, but I hear you.

RYAN: But judging it just as an entertainment, I liked the darkness juxtaposed with neon color and the new characters.

MICHAEL: They definitely took a cue from Marvel and punched up the humor in this one compared to the other DC movies which have all been much more grounded. Sometimes it didn’t work as well.

RYAN: i liked the humor. It comes a bit from Margot Robbie as Harley Quinn but mostly from Will Smith, who certainly knows how to dish a comical line. I liked him a lot in this and his character was very balanced in terms of him being a criminal but you still see he has a heart and conscience.

MICHAEL: It worked better with the humor. DC is trying to build their universe really rapidly and you get way too many characters thrown in for a second and you don’t see a lot of them. Some come in late and they’re just not explained. But my favorite parts of this movie were the flashback sequences. Seeing Joker, Harley, Batman, etc…

RYAN: Yes those bits of the story are the most interesting – and they’re treated like subplots to just give context to the new characters.

MICHAEL: I loved seeing Batman in this though; it really connects it. This film mixed the classic Paul Dini origin story of Harley with the new DC origin story where they Joker-fy her and you couldn’t ask for a more faithful adaptation and I really appreciated that.

RYAN: Let’s just go right tot the Joker – Jared Leto. He’s always the best dressed man on any red carpet. And I’m gonna say it – I like his Joker even more than Heath Ledger’s. He went totally method and sent crazy things to his costars but it paid off because even in comparison to other performances in this film, he stands out. Watching him is like a masters class in acting.

MICHAEL: Joker was very close to source material, apart from the tattoos. He came in like Heath, where you understand him and his chaos. I can’t really compare the actors to pick a favorite. Jack Nicholson was perfect. Heath molded himself into a perfect Joker and Jared was also totally different.

RYAN: After Jared, I loved Viola Davis in this. She’s hardcore in this.

MICHAEL: She plays Amanda Waller and she’s basically a villain too. She symbolizes the government’s reaction to meta-humans. She was flawless. This is PG-13 but it’s slightly more adult as a film. I didn’t really love the connector between Enchantress and Rick Flag.

RYAN: I’m not enchanted by Cara Delevingne on the whole. She’s never believable for me and in this movie she’s playing a witch, which I’m normally very drawn to, but she just looked like the little creepy girl form The Ring.

MICHAEL: She reminded me of Zuul from the original Ghostbusters. I thought Joel Kinnaman was a bit too emotional for the role. There were also some loose ends with the plot. The film didn’t really even explain some of what was happening during the climax. And I was also thinking that the songs in the film that were not included on the released soundtrack were better. I wish they had put more of that music on the soundtrack.

RYAN: The effects were a bit underwhelming. They’ve gotten so great in movies the last couple years and these were noticeably less impressive and realistic. But I did like the climax from a character standpoint. It’s really something to see on the big screen, if at all. And I’m still invested in the whole DC universe. I like these actors and can’t wait for Wonder Woman on June 2, 2017.

MICHAEL: I can’t wait to see more of The Joker in The Justice League.

RYAN: And be sure to stay for the mid-credits extra scene.

Thanks For Viewing The Suicide Squad Review