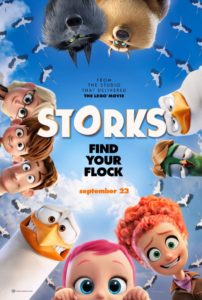 RYAN: I didn’t have any major expectations for this film since it’s not a Disney movie and you could assume that with storks and babies, it would skew juvenile. And for about the first ten minutes it was just that. But then it really surprised me. It’s one of the more original stories for an animated film I’ve seen.

CAROLINE: Wow, really? You know I’m not the biggest fan of animated movies or family films, though as the mother of a toddler, I am seeing more of that fare lately.

RYAN: So many kids movies are derivative of one thing or another and this one really feels fresh. From the story to the characters, to the style, it’s all very unique.

CAROLINE: The color on the poster suggests its own look, with the pink haired baby.

RYAN: Yes the kids are all a bit candy colored which is fun. But I was assuming that it would be the typical story of storks carrying babies, and why they certainly play with that, it goes in another direction altogether. It’s a comedy, coming of age, adventure story.

CAROLINE: Sounds fun. I’m glad you enjoyed it that much.

RYAN: Even a section with wolves where the characters run into a pack turns into something fun an different and clever. I just give many props to the writing. This is written and directed by Nicholas Stoller, who coincidentally did both Neighbors movies so that’s a major jump.

CAROLINE: That is really random. How’s the voice cast?

RYAN: Good. I didn’t recognize all the voices, which was actually kind of fun. But there’s Andy Samberg, Kelsey Grammer, Jennifer Aniston, Ty Burrell, Key and Peele, Danny Trejo and a few others.

RYAN: It’s not ultimately just for the kids. It has an overall theme about defining family and there being the sort of “family you choose,” etc.

CAROLINE: That is an important lesson.

RYAN: I was very pleased by this. It’s a fun one for any age.

Thanks For Viewing The Storks Review