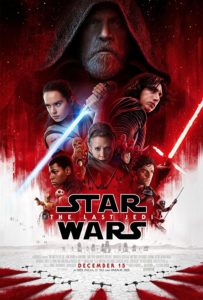 Is Star Wars Episode 8 the best in the franchise because it’s the best story or is it just a circumstance of timing? Taking full advantage of great minds in writing, directing, acting, score, effects; delivering to fans and an audience built by Disney-sister-company Marvel, one can’t deny the influence the times have had on this installment.

It starts with the good kind of chills. The iconic font “In a galaxy far, far away,” then the crash of theme music that strikes an emotional chord with the first beat; but then the energy is different. It is Star Wars, but it looks like Hunger Games meets Harry Potter in a Guardians of the Galaxy universe. None this is anything to complain about. That is all among great entertainment.

Focusing as much on relationships as the action and stunning effects, The Last Jedi is a resounding ‘Yes’ for fans. There are new creatures, Porgs, that offer Ewok-worthy “aw” moments, plenty of light speed travel, lightsaber battles, and all the Luke and Leia you can imagine, especially given the great desire for it, knowing this is Carrie Fisher’s last appearance, untimely as it is. Seeing her as Leia is a major highlight and emotional, indeed.

There’s also a surprise return of another beloved character but no spoilers here. Laura Dern and her purple hair are terrific and I love Oscar Isaac so much. Disney is to be commended for continuously expanding the diversity in casting this universe, but it would be nice to see a gay character. Star Trek is a ahead of that curve. Considering, however, we are buckled in for at least 4 more in this franchise, there is still great “new” hope for that. This may be The Last Jedi, but it’s a new beginning for sure.

Thanks For Viewing The Star Wars: The Last Jedi Review