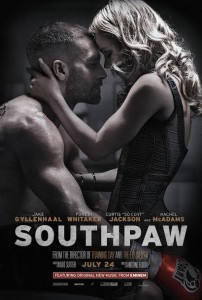 RYAN: I’m excited to review Southpaw with Otto Ohlsson, because he’s the one friend of mine who was most interested in this movie since he first saw the trailer.

OTTO: I really was.

RYAN: I was into this movie. It’s a boxing film and any solid sports film will be enjoyed by audiences whether you’re a fan of the sport or not.  If the story is strong, you become invested in the characters.  I felt connected to these fully developed characters. And even though I am not a boxing fan, it doesn’t matter if the movie hooks you.

OTTO: After seeing this movie, the first thing I thought to myself was, “I’m 38 years old.  Is it too late for me to have a career in boxing?”

OTTO: I’ve always been a fan of boxing and like martial arts.  But this film is satisfying in that it makes you root for the underdog and feel the satisfaction of rooting for the bad guy as well – they’re one and the same. He’s a tough guy who goes through everything and whether you agree with his choices or not, you’re rooting for him.

RYAN: You’re talking about Jake Gyllenhaal’s character.  He does have a great story arc. What he goes through is painfully depressing.  It’s sometimes just sad to watch. And this movie is almost like two different movies. There’s the pre-Forest Whitaker part of the film and the part after Forest is introduced. The first half is just tragic but I have to rave about Rachel McAdams. She is, again, fantastic!  She has some very dramatic moments.  Holy cow!

OTTO: And Jake was excellent too.  He got into such amazing shape for this movie.  I read that it was, like, six months of just living and breathing like a boxer. He trained as a boxer, ate like a boxer. I think he ran six miles every morning. And then he was in the gym for another six hours a day.

RYAN: And it shows. We’re always wanting to have “Madonna arms” because her arms are so incredible. Now I want “Jake Gyllenhaal abs.”

OTTO: If we could just transfer my head on his body…

OTTO: I have to up my gym game. That’s some dedication though right?

RYAN: Truly.  Jake really did transform himself for this role.  not only his body, but there wasn’t an inauthentic moment to his character.  I never thought I was looking at Jake Gyllenhaal. He’s really making wise choices with his career right now.  And this is another one where he’s like a character actor.  His posture, walk, voice… all transformed.

OTTO: Is it Oscar-nominated worthy?

RYAN: It’s directed by Antoine Fuqua who did Training Day which won the Oscar for Denzel.  This is a better role than movie and perhaps if it came out later in the year.

OTTO: It is a deep role.

OTTO: She seemed to contain a lot of the emotional side of the film. I hate to see a kid so young going through all of that.

RYAN: This film makes you realize that boxing takes not only strength and skill but aggression. More so than Rocky or Million Dollar Baby.  You can feel that anger in this one.

OTTO: They say you can’t go into the ring mad because that would take three or four rounds out of you; emotionally draining, etc.

RYAN: The design is cool.  The pro athletes who make so much roll big.  That house was a castle!

OTTO: I think that movie had everything you want from a boxing movie. It had the backstreet gym, with the has-been, the emotional roller coaster…

RYAN: The main theme is really about redemption. I like the growth of character.

OTTO: it’s probably one of the most emotional movies I’ve ever seen.

RYAN: It is intense.

OTTO: It’s amazing – you look at Rocky and you look at Southpaw and how far cinema’s come. Those punches… I felt every single of one of them.

RYAN: Yes! The way it’s shot and the sound editing put you in the ring.

OTTO: The commentators are the real guys from Showtime, HBO… and the Eminem sings really captured the tone.

RYAN: It’s a sad but also rousing sports film.  If you can handle the ride, go for it.

Thanks For Viewing The Southpaw Review