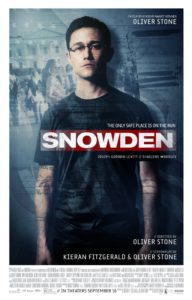 RYAN: Director Oliver Stone is really the King of the biopic. Joseph Gordon-Levitt stars as the whistle-blower, who between 2004 – 2013 worked at the CIA and other places, raising questions about whether government has the right to spy on us – all in the name of national security. JGL is amazing in this. He lit’rally changed his voice for the role. He must have given himself a sore throat; he sounds so different. He transforms. And it’s a bit uncomfy because we see how vulnerable we are through all of our devices.

KEVIN: That is if you take this movie to be 100% accurate. This could just be a very politically slanted view. Oliver Stone is known for that with his movies.

RYAN: But according to the documents Ed Snowden released, the government does have this access.

KEVIN: There’s no denying he released highly sensitive documents, but the story surrounding it and the relationships but be fabricated somewhat, if only for dramatic effect. Who knows what’s true and not. This is one perspective.

RYAN: But the real Edward Snowden was involved in this production so at least we can assume his side is true to his perspective.

KEVIN: My point exactly. We aren’t hearing the other side in this. They also painted the picture of him as a do-gooder and willing to put country before himself and that’s the biggest thing yet to be determined since he hasn’t been brought to justice yet. We don’t really know what kind of person he is.

RYAN: He did seem to sacrifice everything. But politics aside, the cast is outstanding! Everyone from Melissa Leo, Shailene Woodly, Zach Quinto, Nicholas Cage – making a rare big screen appearance after his slew of direct to DVD movies… Rhys Ifans, Scott Eastwood, Timothy Olyphant. It’s like every ten minutes another major star pops up. Oliver garners a great cast.

KEVIN: Excellent cast. I thought Joseph did a good job but unlike you, I didn’t like his voice.

RYAN: There’s one moment that stood out as especially powerful and it’s one where Joseph is narrating animation that explains how far-reaching the intelligence is and how it compromises privacy. I was really moved by that.

KEVIN: The direction really stands out. It is one of Oliver Stone’s better movies. I recognize his style and this was more modern Stone. I hope he gets some nominations for it.

RYAN: I agree. The shots were all set up really methodically and creatively. It looks beautiful. The movie is told over a series of flashbacks where the story is intercut. It begins with Edward meeting with the journalist and documentarian.

KEVIN: It felt very seamless. It goes back and forth well. It spans 9 years.

KEVIN: I’m a huge fan of his. It;s sad his career took a down turn so it was good seeing him.

RYAN: This just raises the question of whether we have the right, or should have the right, to know what the government is doing with our information. Or do they have the right to secrecy? Do we give that up to live in a free state without terrorism? It’s an interesting debate. But this movie says once you cross the line, there may be no going back.

KEVIN: It’s a question of privacy. And we live in a world, now, where intelligence and info is everything. How do we limit just within our borders? There are consequences. It’s an interesting political argument.

Thanks For Viewing The Snowden Review