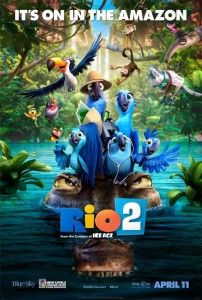 NOAH: I thought it was really good and surprised me that it was better than the first one.

RYAN: I didn’t see the first one. Why did you like this one better?

NOAH: Because the music was so good and it had a lot of thrill.  It was more exciting.

RYAN: I agree the music was wonderful.  Some of it is music from popularly known songs but then others I think were original.  Especially Kristin Chenoweth’s big number – it’s funny, very Broadway and dramatic and a full number.  She really shines and that moment is the very definition of a showstopper – like you could actually want to pause the film for time to applaud after her number.

NOAH: Yeah that was really good.  She was really funny.  I remember her from Wicked as Glinda and I know you’ve seen her in everything.

RYAN: I am a big Cheno-fan.  But the rest of the cast was good too.  It’s funny Jesse Eisenberg actually sounds like a bird.  And that’s just his real voice.  (laughs) Like Anne still sounds like Anne Hathaway’s voice coming from an animated bird, but Jesse actually sounds like what a bird might sound like talking. So random.

NOAH: I didn’t even realize that was Anne Hathaway.

RYAN: Then Bruno Mars was also so good.  He, of course, has a spirited number too and the animation it all very good – like the feathers look so real!

NOAH: Yeah the realness was crazy.

RYAN: Thematically, it has a great message about environmental conservation and relationships.  It paints a very clear picture of the good guys versus the bad guys.

NOAH: It has a very green message, yeah.  It’s outdoorsy and made me want to go camping.

RYAN: It’s a little bit slow about three quarters of the way through, but I think that’s because of the script.  It begins to feel very episodic, taking too long a break between the three intersecting story lines and characters… too long between subplots.

NOAH: I think it was the right length and I liked the ending.

RYAN:  It’s nice for all ages and should appeal to anyone who digs animated movies.

Thanks For Viewing The Rio 2 Review