Pride and Prejudice and Zombies Review 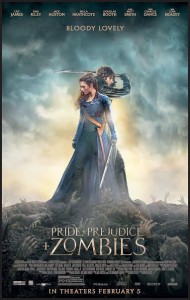 RYAN: This is a cool, fun movie. It’s truly a juxtaposition of the classic Jane Austen tale and zombies. I never read the book but I am curious to know if they play into the story the same way. Outside of the introductory setup of the film and the opening scenes, it sort of feels like there are two movies – like it’s Pride and Prejudice and then once in a while a zombie pops up.

CAROLINE: I can imagine that. It’s such a bizarre concept though, isn’t it?

RYAN: It truly is but it’s the first time I’ve jumped out of my seat in a period romantic drama, so I loved that. And there are some light, comedic moments too. Pride and Prejudice works. It’s a classic for a reason and the changes to accommodate zombies are minimal.

RYAN: I do too. It’s been adapted numerous times, at least four. But this really is fresh. And you can never tire of seeing a dainty, classic beauty in proper dress and hair, pull out a knife or sword and go to town on the undead. It was, like, eye-popping to watch.

CAROLINE: How was Cinderella?

RYAN: Lily James is divine. I love her and she has her Cinderella moments. Girl can wear costumes! But she also works the fight choreography brilliantly. The zombies are so gross. It’s PG-13 and thus not bloody but it is gross. It’s almost like a period Kill Bill movie.

CAROLINE: I can see that – but less blood.

RYAN: Right. And it’s so not a chick flick! It’s the perfect date movie because it has something for everyone – it’s romantic, action-y, funny, dramatic, cool, different. All good.

CAROLINE: I do want to see it, even though I think I wouldn’t want to see the zombies. Maybe I’ll just rewatch another version.

RYAN: No you should see this one. It’s not seamless integration but it’s so unique and fun.

Thanks For Viewing The Pride and Prejudice and Zombies Review