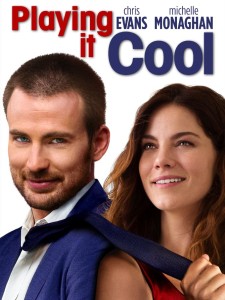 RYAN: This is a new rom com produced by and starring Chris Evans and it’s as though all of his family and friends are in it.  It’s like he must have called in lots of favors because it’s not a big studio film and yet, there’s a huge cast, cameos, etc…

CHUCK: There were times I thought they were films in friends’ apartments.  The number of celebrities in this – they had to be friends, because the budget probably could not have afforded them all.

RYAN: I liked it.  It’s quirky and unique for a romantic comedy in that it’s from the guy’s point of view.  You rarely get into the head of the boy in a rom com and seeing this story from his perspective, where he’s sort of “the girl” in the relationship – and in the movie – is fresh.  It’s still certainly a chick flick and for the romantic demographic, but it’s a male protagonist.

CHUCK: I didn’t feel like it’s a chick flick.  I understand it is, technically, but I also think it’s totally a guy movie.  It seemed really immature to me.  It felt like it was written by a 20 year old who was trying to be deep but hasn’t experienced these things yet.

RYAN: Well men mature later than women, emotionally, and in the case of Chris’s character, he was so guarded against love that his experience was stinted, so I found that lack of experience appropriate.  It’s also very meta, self-referential.  He plays a screenwriter assigned to write a rom com, but lacks any real relationship experience and thus begins the movie.  It was overtly meta.

CHUCK: Absolutely.  It does set up the premise but his writing is not the whole film.

RYAN: I loved how active his imagination was.  There was an Ally McBeal aspect to this film because we get to see inside his imagination and it’s so vibrant, almost like short films within the film – with exotic costumes and settings and even the personification of his heart as another character.  I loved that.

CHUCK: They were trying to do something different and make it more creative.  I didn’t laugh at all during this, though, so I would look at it more as a drama.

RYAN: But it is funny.  I don’t often LOL when I’m laughing on the inside.

CHUCK: I’m being more sarcastic because I didn’t like it as much as you.  I was bored during it.

RYAN: The timing is interesting, because the new Avengers just came out and now Captain America is in this new rom com.  That’s either wise or not.  But I like him in any size movie.

CHUCK: Michelle Monaghan is also very likable and they have a cute chemistry going on which you can actually see at one point.

RYAN: I found it interesting how it calls out some romantic comedy cliches and then delivers some of them while also his character plays against the type a bit so it’s a juxtaposition.

CHUCK: There’s a reason why cliche and formula works during romantic comedy.

RYAN: True but I prefer them when there’s something that breaks the mold and is more original, so I appreciated some of those aspects in this film and then was perturbed by others.  It’s cute.  Its a breezy, fun, light movie.

Thanks For Viewing The Playing It Cool Review

Antebellum, The Nest, Red Shoes and the 7 Dwarfs, The Devil All the Time Review