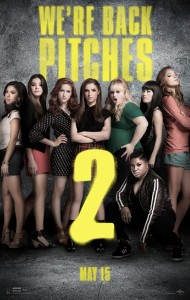 RYAN: The Pitches are back and it feels so great!  Seriously, as soon as this movie started if felt like being reunited with an old friend you’ve missed so much but can just pick up with anytime and not skip a beat, you know?  I must have seen the first film six times and love it.

CAROLINE: Yeah it’s a pretty sweet movie.  I’m bummed I wasn’t able to attend this screening with you.  How’s the sequel?  Sophomore slump?

RYAN: Not at all!  It really takes things to the next level, without jumping the shark or overreaching.  And yet there’s still enough familiarity with the formula of the first one to really delight in the new one.  Whereas the first was about Anna’s character, this is about her next chapter and also a focus on Rebel Wilson’s Fat Amy.

CAROLINE: I love it.  Do they do any acca-battles?

RYAN: For sure.  Brilliantly.  All of the musical moments in the film are just fantastic and beyond fun.  I looked forward most to those, but this film also allowed for more character development, where you start to understand and care more about each of the Bellas.

CAROLINE: Anna Kendrick is amazing,  Remember when we first saw her in Camp?

RYAN: Yes!  She was a scene stealer then and she’s just the coolest person on earth.  I love her and especially in this role because i feel like it’s very her – at least who she appears to be in interviews too.  She’s quick, witty, sarcastic, creative, funny… I can’t say enough nice or cool things about her.  I kinda wanna be her.

RYAN: She’s the best.  And there’s a new original song in this movie, written by Sia, that could be like this film’s version of Cups.  It’s new but they wisely allude to it a couple times throughout the film s that when it hits during the climax, you just get chills… they build up familiarity with it so it’s not totally new by the end of the film.  That was genius.

CAROLINE: Clever indeed.  I’ll have to listen to the soundtrack.  This is also the feature directorial debut of one Elizabeth Banks.  How’d she do?

RYAN: So well!  Just when there was a shot you wish you could see, it would appear.  It can’t be easy to come out the gate with a musical, all those Glee-like numbers (but better) and she nailed it.  And once again, alongside John Michael Higgins, as the commentators – some of the best laughs in the film.  It’s really a very funny comedy.

CAROLINE: Love how they play off one another.  It has to be improvised.

RYAN: For sure.  So good.  The movie has a great open and just runs steady from then one.  And there are so many excellent cameos that are not cheesy.  They’re clever and hilarious.

RYAN: I’m not always the biggest fan of hers but I’ve liked her in a couple things and she’s terrific in this.  It was the right casting,  And you know the Green Bay Packers are in it.  And with all that singing and dancing, if that’s what football was about, I’d become a fan.

RYAN: There’s rumors of a possible third.  I’m hoping this does well so that happens.  I loved it as much as the first and some people in my movie club said they liked it even more.  So hoping for a great opening weekend.

Thanks For Viewing The Pitch Perfect 2 Review