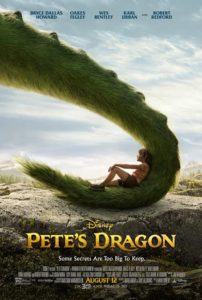 RYAN: The original Pete’s Dragon from 1977 is one of my all time favorite movies – within my top 10. I was super nervous about this because it has been remade without being a musical and the original songs are so brilliant. The names have changed, there are other characters and this movie had to be exceptional in order for me to like it. I am ready to tear it apart; but the good news is – it’s not a remake. It’s a reimagining. Aside from Elliot and Pete, it’s all new people, location, story – just completely new. The heart is the same. The score has a celtic sound and it’s all different. And it’s spectacular! It’s emotional and you care so much about them. I fell in love with this movie all on its own without decimating the memory of the original.

CHUCK: The original is one of the last breaths of the old Disney studio. They were trying to go after another Mary Poppins. It was bright and fun and you had the haunting Oscar-nominated Candle on the Water… It was the last of the studio musicals the way they had been. Like you, I love the classic one. It’s a bit lesser know but i’ve always loved it. Movies like that were less popular then. But with this new one, I was won over within the first 30 seconds. It’s darker than the original. It’s magnificent. It’s one of the best of their new retellings of their classics. I’d put it up there with this year’s The Jungle Book.

RYAN: Me too. This movie is as far form the original as CGI is from hand drawn animation. And they might have started there. They realized they can make an Elliot that looks like a real being instead of a cartoon today. It blends seamlessly with live action.

CHUCK: And they kept some of this personality and special skills.

RYAN: And there was just one moment near the end of the film where his face looks like, and reminded me of the face of, the original Elliot and I melted. So touched. I love this character as much in this as in the original.

RYAN: I didn’t notice them at all.

CHUCK: Maybe it’s because I wanted them to be there, but I saw a couple familiar things.

RYAN: This movie is so much of its own movie with new names, no light house, no seashore, a new town.

CHUCK: I think it’s cool that it takes place when the original movie came out in the late 70s.

RYAN: Yes that is an interesting nod instead of making it present day. There are no cell phones.

CHUCK: And it’s subtle but the cars, costumes, kitchens, all late 70s. And whereas the first movie is very bright and colorful, this is more subdued, natural and looks like nature.

RYAN: On its own I loved it. Bryce Dallas Howard and her eyes are so expressive. And Elliot and the way the actors relate to him make you believe it so much. The film hooks you emotionally so effectively. The whole film hinges on whether they can make you believe in it and invest in these characters and you will from the first frame. It hooks you right away. You are so deeply about Elliot and Pete. And you really believe this town believes in dragons too.

CHUCK: The 3D was subdued but cool. It’s well done and the direction is very good.

RYAN: The themes of friendship, family, bonding, needing one another are so universally appealing and relatable.

CHUCK: The humor was great but not slapstick or skewed too young. It doesn’t talk down to the audience. Pete is a phenomenal kid and there’s so much joy and youthful curiosity with him that it takes you back.

RYAN: And among the new characters is a little girl who makes Pete even more accessible. Their relationship is very unique and the way she relates to the other characters and the story says a lot about the curiosity and boldness of childhood.

CHUCK: Absolutely and that’s one of the moments that felt like Spielberg to me – like in ET and Close Encounters, there are ways you see the movie through the child’s eyes and she was another set of eyes.

RYAN: And the movie just pulls at your heart. I welled up with tears several times – both happy and sad.

RYAN: I don’t normally hear you cry but I could tell this movie got you.

CHUCK: This is classic Disney done new. I think Walt, himself, would be pleased. It’s a family film but not pandering to childish levels. It’s not simple.

CHUCK: It’s balanced between all elements and emotions.

RYAN: And it’s and adventure. There’s a folklore feeling to it with the celtic score and Robert Redford’s narration that bookends it and the wood cavings that look like cave drawings. The notion of the North and the sounds – it’s so neat.

CHUCK: And with the opening song and the lyrics with much of the soundtrack and the little girl sings once so there is a musicality to it.

RYAN: I wish even during the credits that they would have used one of the classic songs.

CHUCK: I was always listening from some of the melodies but never heard it.

Thanks For Viewing The Pete’s Dragon Review