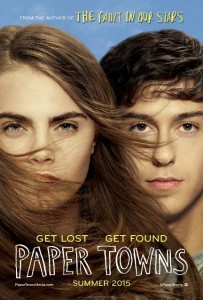 RYAN: This is the film adaptation of a popular young adult novel by John Green, author of The Fault in Our Stars.  This one isn’t a weeper though.  It’s a romantic teen mystery, thriller, buddy comedy all rolled into one.  It’s doesn’t genre jump as much as it blends them all.

BRAD: And it does so very well.

RYAN: There have been some really great movies in the last few years about high schoolers with fantastic stories that are interesting but also take you back to your teenage years.  With this one, however, didn’t make me relate as much as Me and Earl and the Dying Girl or Perks of Being a Wallflower.

BRAD: Neither of us had read the book and I really came into this flying blind.  I didn’t even see The Fault in Our Stars.  That said, I was really into it after the first 15 minutes or so.  I don’t compare it as much as you do to other movies involving teenage characters.  It’s a coming of age film with a nice ensemble cast.  It’s a spontaneous last hurrah story that is inspiring.

RYAN: There are some terrific themes in this about transformation and growth, stepping outside of your comfort zone, friendship, love…

BRAD: It’s almost a modern-day Stand By Me, if I were to draw a comparison.

RYAN: The casting is great, even though these kids aren’t yet household names.  Nat Wolff looks like a young Dustin Hoffman.

BRAD: He changes in the light.  He also sometimes looked like a young Adam Sandler, to a poor man’s Dylan McDermott.

BRAD: I was thinking Kathleen Turner, Susan Dey with a dash of Melissa Joan Hart.

RYAN: All of the girls are gorgeous and the boys are all nerdy but that’s sort of the point of their characters.  They’re high school archetypes.

BRAD: And it’s those guys that go out doing things while the bros, or pretty types, just sit around and drink.

RYAN: The romance is good and for PG-13, it’s pretty suggestive, especially by one of the buddy characters.

BRAD: Well there’s the internet and times have changed from when we were that age.

RYAN: It’s true.  I just didn’t connect with this one as strongly as some of the better written teen films recently.  The mystery here is also not as suspenseful as it should have been.  You watch the character look for clues, but they’re all so obtuse.  It would have been more fun if we, as the audience, could have pieced some things together.  Of course, most of the kids in the audience were fans of the book already.  The film does get stronger in the second half.

BRAD: I really related to the desires of the main character.  His hope and the chase really grabbed me.  It was a good coming of age story.  We watch them develop and mature during the course of the film.

RYAN: Their evolution is good and I appreciate that character development.  I just didn’t connect to it the way you did.  As for the design, cinematography, score – it’s not very artistic.  It’s about the story and casting.  There’s one fabulous cameo which I cannot spoil but all of the teen girls in the audience collectively screamed at that moment.  It was great.

BRAD: Oh yeah.  You had to explain to me why but now I get it.  I really liked this movie.  There are a couple great literary references that make this deeper than first blush.

RYAN: Yes that part of the film is really brilliant.  This is a good one to see if you’ve read the book.  But if you can wait, it would be just as much fun to watch at home.

Thanks For Viewing The Paper Towns Review