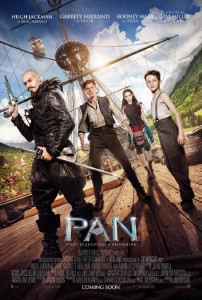 RYAN: This is the new prequel to Peter Pan that is a live action, fantasy film.  It’s a fantastic adventure; colorful, so filled with magic and excitement.  You feel like you’re on an amusement park ride for much of the movie.

GABY: I totally agree.  It is really cool to watch all of the special effects and scenes with so much happening in them.  There’s a lot of action and adventure and I just liked looking at the screen and enjoying the story with all those cool visuals.

RYAN: The 3D and effects are outstanding.  Much of the film is CGI and there is so much magic happing in the story – the fairies, the mermaids, the flying ships… it’s an optical delight.  When we first see Neverland, it reminded me of when the Wizard first arrives in Oz in Oz the Great and Powerful.  It’s almost that stimulating. It’s all so dynamic and gorgeous.

GABY: The 3D was really nice.  Sometimes 3D movies don’t really make me think it’s that necessary but this one was really enhanced by it.

RYAN: Prequels are working out really well lately, or shifted perspective stories.  We had Oz the Great and Powerful, Alice in Wonderland, Maleficent... all did what Pan is now doing.  This takes the characters from Peter Pan and it’s cool to see who he was in the real world before getting to Neverland, what created his mommy issues, how he first came to meet Captain Hook, Tinker Bell, the Lost Boys, etc…  It’s an original story and in that way, like a superhero film; but it also feels a lot like an Indiana Jones movie.

GABY: I also enjoyed learning the backstory for these characters and how they all connect to each other.  It was really clever how it ties back in to what we know of Peter Pan.

RYAN: Yes – for those of us familiar with the stage musical or the Disney animated classic, there are some winks and nods to those which are really fun.  Those moments of nostalgia make you really aware of how carefully they respect the source material and celebrate it.

GABY: I was a little confused at the beginning because the pirates did a lot of singing and I thought that it would turn out to be a musical but it’s not.

RYAN: Yes and what’s interesting is they were singing a Nirvana song that also appeared in the movie Moulin Rouge.  It’s a modern song that really doesn’t fit in Pan. But for some reason, they opted to work with that song instead of going with something original or even more timeless for Neverland.  That was very odd.  The pirates are different.  They’re like circus pirates.  The costume design is so strong.

GABY: The pirates were funny.  And there’s a Blackbeard in Pirates of the Caribbean, but he was kind of good in comparison to the one in this movie.

RYAN: Yes Hugh Jackman is the villain here.  His costumes and makeup were fantastic.  It’s an epic, sweeping, large film.  It’s an event film – very lavish and colorful.  The use of colored smoked is strategically used at a certain point which was quite unique.  I don’t want to spoil why.  And the story is well thought out and clever.  It’s nice, now, imagining this is some of the backstory and it certainly leaves open the option for sequels that would still be precursors to the point of the film we know.  There are also some very cool animated short segments in the film that were done really creatively.

GABY: The mermaids were so cool.  Reminded me a bit of On Stranger Tides.

RYAN: I wish it hadn’t ended, open for a sequel.  In case it doesn’t do well, I’d like to know more of this story.  The only real weak link in the cast was Rooney Mara.  I love her as an actress but she’s a bit blank stare and devoid of emotion in this.  She seems pretty cool and cold as a person to begin with, so in her character work, she really needs to loosen up and show some warmth.  She was miscast in an already controversial casting as a white actor playing Tiger Lilly.

GABY: I thought the actor who played Hook was annoying.  His voice was so deep.

RYAN: I liked him – Garrett Hedlund. He was a stylized version of a young Hook but I dug him.  He did seem like Indiana Jones.

GABY: He didn’t really hint at all that he was becoming the Hook we know.  I liked Hugh as Blackbeard, though.

RYAN: Yeah he was really relishing in this role, you can tell.  It’s overall entertaining and brilliant escapism.  Not from Disney, but from Warner Bros now… I’m really enjoying all of the live action fairy tales we’re getting.  This is another winner.

Thanks For Viewing The Pan Review