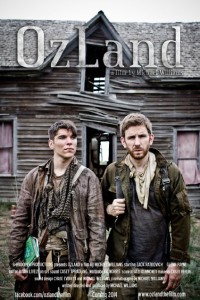 RYAN: I’m psyched to review this new indie film by writer/director Michael Williams who also produced, shot and edited it, BTW.  I discovered him on Facebook and contacted him a while ago, as an Oz fan, when I saw he was working on this sci fi movie, inspired by Oz.  He was gracious to keep in touch and send me a Blu-Ray for review.  It’s brilliant!  The story is complete and fulfilling; such an impressive accomplishment.  The cinematography is extraordinary and meticulous.  It’s shot like it was backed by a major studio with a blockbuster budget.

NATHAN: Absolutely.  The art direction and effects are also as good as any independent film I’ve seen.

RYAN: Since I love Oz movies, I was obviously rooting for this film and it surpassed my expectations in design.  The lighting is excellent and the focus, rack focus especially, is so fantastic, you just have to appreciate the technique and artistry there.

NATHAN: Every shot is artistic and well done and looks even better than some of the stuff we see in wide release.  This movie has not been distributed yet, but may be at some point.

RYAN: This is a director that deserves a shot at a big movie.  His competence oozes from this film.  He wore so many hats and usually when one person does all of that on a film, it suffers because there’s no one to reel him in.  But Williams is clearly talented and surrounded himself with a good team.

NATHAN: You could pause the movie at any point and you have art, a post card, or something framed well.  The landscapes were amazing.

RYAN: Yes. All of the environments are cool.  It’s this post-apocalyptic world and they found the most idyllic locations to shoot; abandoned areas.

NATHAN: I know you don’t do spoilers but want to talk a little about the premise?

RYAN: It’s about two guys who seem to be the last on earth, with very little knowledge of their current world.  It’s a dystopian future and the younger gent stumbles upon a copy of the book The Wonderful Wizard of Oz by L. Frank Baum and interprets it as though it’s the bible.  He approaches the world like Oz is gospel.  Needless to say, I find the premise fascinating. Any big Oz fan would.

NATHAN: I found it appealing too.  Like you, I also read all of Baum’s Oz books growing up and like them. I just wonder how long it took the filmmaker to scout out all of those places.

RYAN: It’s a cool movie, a little slow moving at times; but I was always wanting to see what’s around the corner and from the very beginning you’re curious about how it will end.  It’s really like a love letter to The Wonderful Wizard of Oz and it’s great to see how little pieces of that story start to have implications in this film, in a very real yet fantastical way.

NATHAN: I liked this more than some of the other Oz movies I’ve seen.   It’s not a family film though.  There’s a depth and maturity to it, but also a real innocence.

RYAN: That’s really portrayed in the two characters.  One is very optimistic, innocent and hopeful and the other is more jaded, pessimistic, but also has some hope at times.  Seeing them wander together as a new-formed family was interesting.  It’s a character study of these two personalities.

NATHAN: Yes. We don’t ever find out how they came to find one another or even get a clear explanation about what happened to everyone else on the planet; but you almost don’t miss those bits of info because of the way the film hooks you.  It’s intriguing and there are twists and hints of things that keep you engaged.  They’re both in the same situation but experiencing it in different ways, largely because of the Oz book.

RYAN: Zack Ratkovich plays Leif, the younger one, and it’s because of his dedication to the script that you’re able to have the suspension of disbelief in this film.  It sort of hinges on his believability.

NATHAN: There was a point where I thought the role might have been better cast with a younger actor but I changed my mind about that later in the film.  He was great.

RYAN: And Glenn Payne plays Emri who’s the more wary of the pair.  He’s great, too, and knows how to rock some scruff.  They work well together on screen.

NATHAN: I’m from the South and I noticed that the actors seemed to start out with a Southern accent but then it didn’t  last throughout.

RYAN: I didn’t pick up on that.

NATHAN: They look great.  The costumes are very good.  It’s a post-apocalyptic world and they were never too clean or too dirty so there’s a reality in their look that serves the film.

RYAN: You sort of bounce back and forth between which character you identify with in different moments.  It’s really delightful seeing which kernels of Oz come to life in the film.  Some of them are dramatic and suspenseful.

NATHAN: Totally.  It’s a fun mental game connecting the dots that way and it was cool watching it with you, screening alone, and being able to discuss together.  It’s the kind of movie you want to talk about afterward to process.

RYAN: The ending especially – I was so tense and afraid of how it was going to end.  Ultimately I love the ending.  It’s perfect and of course, I can’t say why; but I like that depending upon who you are and what your outlook on life is, that’s what the ending means to you.

NATHAN: Right.  It’s a very cool ending that way.  And regardless of how you interpret it, this movie will make you react.  It’s certainly a science fiction film but it’s easy to sign onto the concept of this film because all of the elements come together beautifully.

RYAN: I love Oz movies and this is my favorite among the indie Oz films – and I’ve seen a fair few.  It looks phenomenal on Blu-Ray and would be even better on the big screen.  I’ll easily watch it again someday.

Thanks For Viewing The OzLand Review