Now You See Me 2 Review 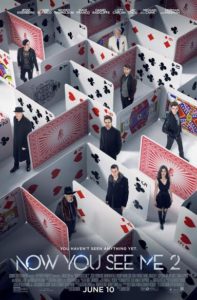 RYAN: This is the sequel to the 2013 magic/heist thriller. These characters are like modern day Robin Hoods in the sense they steal from the rich and give to the poor, or more accurately, they are vigilante magicians who expose the big, bad corporations.

CHUCK: As they do.

RYAN: Where are the real life vigilantes anyway? The Superheroes? The opposite of terrorists? Anyway, I hated the first one – said Skip It – so had low expectations but for the fact Harry Potter, Dan Radcliffe, is in it. There are Harry Potter overtones and some Wizard of Oz references so I have to get my biases out of the way. One of my favorite lines of Dan’s from the Harry Potter films is in this movie – and hearing him say it as a different character was amazing. He plays a villain in this movie. He’s great and the whole cast is strong.

CHUCK: The whole cast returns except for Isla Fisher who I know you didn’t miss because she’s replaced by…

RYAN: Lizzy Caplan who brings so much wit, sarcasm and comedy to this. She’s a scene stealer. She’s so funny.

CHUCK: I feel like that’s kind of who she is in real life. She’s great.  Unlike you, though, I did like the first one. It’s totally a popcorn movie and so is this one. You don’t have to think too hard, you can just sit back and be entertained. There are some atmospheric similarities to the first one. They create their own tone. The acting, locations are cool. The plot is fun. If you think too much about it, it starts to fall apart.

RYAN: There are wholes in the plot, inconsistencies, continuity issues within this one and between this and the first. But I didn’t really care because it’s entertaining. There are loose ends. But what does work is the suspense, the drama, the trickery – all the cool effects, especially the choreography with the playing cards. Wow!

CHUCK: And the chemistry in the cast.

CHUCK: The purpose of any good action or thriller is to get to the climax and while this one does take its time getting there, once the ball starts rolling, it’s so good.

RYAN: The suspense works so well. One problem is Woody Harrelson as twins.

RYAN: A busted one. But the effect seeing him as twins in the same frame was very low quality. I’ve never seen it so poorly done before, especially at a time when effects are better than ever. That was unacceptable.

CHUCK: They should have just cast someone else. He didn’t need a twin. But again, this is the type of movie where you go to the theater on a hot summer day, to get out of the heat, enjoy the air condition, have your popcorn and soda and not think too much about it. It’s just some quick escapism. You’re better off not thinking about it.

RYAN: Morgan Freeman, Sanaa Lathan, such a good ensemble. But the score, which is very good and adds to the style to the film was a bit overpowering at times – it might have just been the audio mix in the theater.

CHUCK: It’s a family friendly movie, anyone over the age of 7 would probably like it. I wouldn’t have regretted paying for this.

RYAN: Not at all. It’s a good movie. I’m surprised it’s so much improved from the first – I’d be happy, now, for a third.

Thanks For Viewing The Now You See Me 2 Review