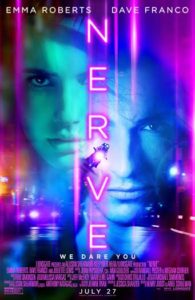 RYAN: This is a new action thriller, featuring Emma Roberts and Dave Franco in leading roles – and they pull it off and they’re both so hot. I enjoy them both and their chemistry in this really makes it that much more enjoyable. Plus, Nerve is so now – it’s all to do with today’s social media, voyeuristic reality competition, everything app and online and all of its pitfalls. And I liked it. And I’m happy to introduce a new associate, Nathen Kooi, who sees almost as many movies as I do. What did you think?

NATHEN: Emma and Dave are very natural in this. You really buy them as these characters and their chemistry grows as it unfolds. And there’s a good message with a theme of social responsibility that I found interesting because people just hide behind their screens online and the anonymous aspect of it allows them to act differently and think differently than they may otherwise.

RYAN: The social commentary in this is heavy handed but really necessary, especially since this it really targeted toward the younger crowd who most use social media and are growing up with it. I also love NYC in this movie. This takes place all over the city so it’s cool you get a bit or a tour watching this. You’re a big music person – what did you think of the soundtrack?

NATHEN: It blended really well and that music and vibe really fit well into each moment and scene. And I recognized some artists as ones I’ve seen live in concert. It’s a good soundtrack.

RYAN: Juliette Lewis plays Emma’s mom in a more understated role for her. It’s kinda cool seeing her just play the mom. She so talented.

RYAN: The concept of the game –

NATHEN: It’s like, something that could totally happen if there was someone who would figure it out and launch it.

RYAN: Yes – it’s like already happening in some ways – some people are desperate and will do anything to get more viewers or watchers and even if it’s dangerous or reflects badly on their reputation, they don’t care – so then to monetize it and make it a competition – and then on top of it all we have Pokémon Go!

NATHEN: (laughs) Exactly. It’s a crazy time to be dealing with all of the technology.

RYAN: People who are desperate for attention do cross the line of what’s appropriate. And there are some great twists in the movie. I really love how unpredictable it feels.

NATHEN: Yeah there wasn’t much foreshadowing or what direction the story would turn.

RYAN: There’s also the theme about people having a morbid fascination with seeing others fail. But on a lighter note, the graphic effects in this were incredible – you go through the computer.

NATHEN: That was very innovative and cool.

RYAN: It’s based on a novel from 2012 and it’s very original. There’s good suspense too. And if you’re afraid of heights, you might not like a certain scene.

RYAN: You need a lot of suspension of disbelief to buy this movie though, especially for the climax. Because if you know NYC at all, or if the game in this movie were really that popular, the cops would have totally been on to it.

NATHEN: Totally. I really liked it and was into it the whole time – it really grabbed my attention.

RYAN: It’s the perfect length, just 90 minutes. I’ve seen other films, like Unfriended, that tired to use the whole movie online plot, that did not work. This works… and is a cautionary tale.

Thanks For Viewing The Nerve Review