Murder for Two, review from a live stage performance at the Milwaukee Rep 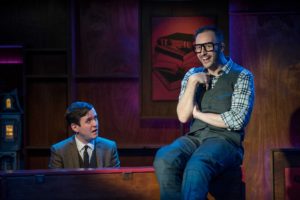 After seeing the recent big screen remake of the lukewarm Murder on the Orient Express, I was a bit leery entering the theater for another murder mystery. But trepidation faded instantly for laughs, suspense, and much earned ovations. Murder for Two – at 90 minutes – is about as much fun as one can pack into a simple musical production, complex with story and performance art. The term tour de force exists for the kind of performance given by Joe Kinosian (who also co-wrote the show with Kellen Blair). It’s a must see feat of genius! You falter between watching and marveling at how any artist has the stamina to accomplish what he does.

It’s mystery the way it should be – drama, mayhem, humor and heart; giving life to an array of suspects, each with potential motive. And the subplot, with a wannabe detective (Matt Edmonds), adds a dash of underdog and romance. Playing now through Jan. 14 at the Stackner Cabaret. Tickets available at MilwaukeeRep.com.

Thanks For Viewing The Murder for Two Stage Musical Review