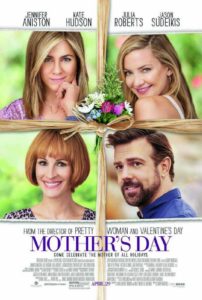 RYAN: This is the third film in the holiday movie franchise by director Garry Marshall that features amazing ensembles of celebrity casts. He did New Year’s Eve and Valentine’s Day, both which I found mediocre and disconnected. But this one fixed all the problems. It’s charming, funny, endearing. You laugh, cry. I loved it.

CHUCK: I liked it too. I only saw New Year’s Eve, but agree this is better. There are some uneven moments to it, but overall, it was a fun time at the movies. The cast is perfect. Kate Hudson, who sometimes annoys me, was wonderful.

RYAN: She’s never annoyed me… in a movie.

CHUCK: They worked in her Snapchat in this movie.

RYAN: She is an avid Snapchatter in real life and she does utter the word. There are some meta moments in this between that and the reteaming of Julia Roberts with Hector Elizondo with their Pretty Woman references.

RYAN: Can we just discuss that hair? Walking in I was so trepidatious because it looks ridiculous, but then the movie begins and in context, it’s perfect!  She plays a host on HSN and her work is outstanding. It’s a supporting role, but I’d take a spin off of her character. I was so drawn to her.

CHUCK: I really wish we would have seen more of her. She goes from broad physical comedy to making you cry within a heartbeat.

RYAN: And with Britt Robertson. I really like her. She went from working with George Clooney in Tomorrowland to Julia here.

CHUCK: She’s working her way through the cast of Ocean’s 11.

RYAN: And Jennifer Aniston, who has the biggest story arc in the film, is excellent. She seems so approachable and real. It was cool seeing her with Jason Sudeikis, who is so great.

CHUCK: Timothy Olyphant is good too. And Sarah Chalke in a very key role.

RYAN: Plus Margo Martindale as mom to her and Kate. I met her in January at the Critics’ Choice Awards. I love a good ensemble.  And comedy, when it’s done well, can bring up very sensitive themes – racism, sexism, controversial things, and bring people together as an audience.

CHUCK: It’s a spoonful of sugar. It has LOL moments but also interesting perspective on what mothers go through.

RYAN: And there are mothers at every age and in different predicaments – you have grandmothers, estranged mothers, divorced moms, widowers… it’s an all encompassing version of something everyone should be able to relate to.

RYAN: I love all the details in the movie too – it’s so suburbia fantasy. The cars, locations, hair, costumes – soundtrack. It’s a full two hours that holds your interest. I’m so glad they hit their stride in this movie.

RYAN: These movies all strive to be Love Actually.

CHUCK: That is the classic standard.

RYAN: This is is closer to that that the otters. Take your mother!

Thanks For Viewing The Mother’s Day Review