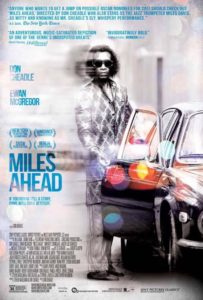 RYAN: Written, produced, directed by and starring Don Cheadle, Miles Ahead is the very definition of tour-de-force – clearly a passion project and the achievement of a lifetime. It’s the Miles Davis biopic. I hadn’t known really anything about the man before this and this is how a biopic should be done. It may be the best I’ve seen.

CAROLINE: Them’s fighting words! Didn’t he also do some composing in the score?

RYAN: Yes! It’s amazing. And it’s just an incredibly crafted movie. It’s some of the best written confrontation scenes you’ll see – such intense interplay between script, direction, performance, you forget you’re watching a movie – it’s like you’re actually in the room with them. I loved this.

RYAN: It’s so good. I’m already thinking Oscar nom for picture and actor, maybe even director – though it’s so early in the year. I wonder if there will be a big campaign around awards season. This title deserves it.

CAROLINE: There’s so much to come out, yet this year, though.

RYAN: This movie really details what a tortured soul he was – such an artist. I get tired of some artists today – primarily in the music industry, who blur the lines between their music and their personalities – but this man really lived it. Plus he had a major drug problem.

CAROLINE: This just in, drugs are bad.

RYAN: (laughs) Yes. I just love drama that plays like action. There’s suspense and the dialogue, and stakes, at least from the characters’ perspectives, are so high.

CAROLINE: I can’t believe you’ve already said this much about the movie without yet mentioning Ewan – your fave actor.

RYAN: God I love him. He is my fave. He’s great in this and looks beautiful. I’m beginning to realize he’s not the greatest actor though. At least in this. He’s terrific but I felt like he had a toe out. Something about him looked like he was about to crack and smile or laugh at any moment. He wasn’t fully committed or something. He’s still my favorite though.

CAROLINE: How were the flashbacks? This takes place between the 70s and 50s, correct?

RYAN: Yes. That’s part of what impressed me so much about this movie – the flashbacks are handled so creatively and cleverly. They’re seamless within the film – woven beautifully – with great transitions – reminded me a bit of La Vie En Rose. And both time periods are so good, while you’re in them, you forget about the other time. It’s just so well done.

CAROLINE: That’s cool. You’re honestly making me feel like i have to see this.

CAROLINE: And how is Don’s performance?

RYAN: Excellent. He even learned to play the trumpet for it. It’s terrific. This is as good as a biopic gets. There’s a real intoxicating quality about it.

Thanks For Viewing The Miles Ahead Review