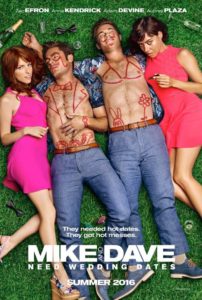 RYAN: I was dreading this movie because we just saw Z’Efron in a new Neighbors movie and I’m sick of him doing comedy, where he plays the stupid bro. But I do love Anna Kendrick. It was better than expected. It’s like a new Wedding Crashers with a younger cast; an indirect competition here between the guys and girls – who’s more obnoxious. It’s a rom com with more comedy than romance. I did laugh.

BECKY: You did and I did as well but not as much. For me, I was in the mood to laugh and I like this cast, but this is the first movie I’ve reviewed with you that I feel was really forgettable. There’s nothing I guffawed at. Adam Devine is so much funnier than he was in this and Aubrey Plaza – I like her and her character in this. I am a devout Zac Efron fan. His shirt came off once.

RYAN: I preferred him in this than in previous films. He’s still not the best actor but he’s passable in this; whereas Adam was way over the top in this movie. Overacting Jack Blackish.

BECKY: Did you like the actress who played their sister?

RYAN: No – Sugar Lyn Beard. She was really overacting and her voice is annoying.

BECKY: Like Kristin Chenoweth without and singing or Broadway cred or charm. The only funny lines, to me, were throw away moments.

RYAN: I think the comedy worked better than that. Yes there were lines that I laughed at but there moments building within scenes were also quite comical.

BECKY: I did like the music in it, especially at the end.

RYAN: Yes there is a musical moment and not to spoil, but having Zac, Anna and Adam all together in a movie, it would be a missed opportunity not to have that. It’s brief but fun.

RYAN: It is predictable but romantic comedies are. But the construct is original – I haven’t seen this set up before. There’s a literal bromance – they’re brothers. It’s a coming of age or maturing and it’s a rom com. And the situational comedy is enjoyable.

BECKY: It won you over. You went in with really low expectations.

RYAN: I appreciated there are two sets of relationships here that developed at different paces. Even though we know where things are going to end up – the story is in the road to get there. This movie is very much the journey, not the destination.

RYAN: They seem like really one dimensional characters but during the quieter moments, we see these people grow up a bit. And I like that it’s rated R and racy but not all gross and pandering to the lowest common denominator with the humor. It’s a nice middle ground – that’s what I liked most about it. It’s adult enough to be R rated but not lame toilet jokes. Young characters, mature content, and funny. They’re self centered partiers.

BECKY: There are people like that and it’s nice to see in this movie, at least, there might be hope for them. This just didn’t really appeal to me that much. I probably wouldn’t have finished it at home.

RYAN: I liked it. I found this to be a refreshingly fun and funny movie. The balance between the male and female comedy here was good – a good ensemble comedy.

Thanks For Viewing The Mike and Dave Need Wedding Dates Review