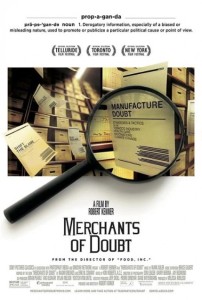 RYAN: I love documentaries.  And they’re the best when they’re both entertaining and enlightening or educational.  This is one of those docs.  And it’s a bit maddening too because it’s about real issues and how easily manipulated we are as consumers, as the general public and the like.

CAROLINE: Yes some documentaries can really be insightful and almost like a call to action or a wakeup call for certain issues.  This one sounds really interesting.  How was it?

RYAN: Fantastic.  It’s very well laid out as a cohesive film, with important information coming out you, without beating you on the head with it.  And the graphics are all really inspired.  The movie draws a parallel between magicians using slight of hand tricks with the political or business talking heads who misinform us on behalf of greedy companies.

CAROLINE: That’s both scary and pathetic all at once.

RYAN: It’s maddening.  The film uses what the tobacco industry did in burying their evil truths as an example for how other industries are currently knowingly deceiving the public.

CAROLINE: That is outrageous.

RYAN: So then the film dissects furniture that is flame retardant, global warming, etc… basically the world is going to end and we’re not doing anything about it.

CAROLINE: (laughs) Well some of us are.

RYAN: It all comes down to the reality that government needs to get involved in order to make a real difference but many people are not comfortable with the concept of government intervening in business.

CAROLINE: And this movie focuses on the people who are knowingly lying to the public?

RYAN: Yes.  And some of them are proud of it.  It’s sick.  Think about catastrophe movies.  We’re talking about the end of the human race – what higher stakes are there?  And yet the world drags its feet in making a change that could save us.

CAROLINE: It sounds so dramatic but I see your point and ultimately, wouldn’t we all rather be safe than sorry – of course, the businesses who would lose money wouldn’t.

RYAN: I was so moved by this film, I totally signed the petition at TakePart.com and urge you to as well.  And check out the movie!  It’s engaging but the reality is scary.

Thanks For Viewing The Merchants of Doubt Review