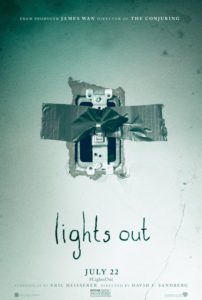 RYAN: This is a horror from Warner Bros., produced by James Wan and it’s just ok. The scares are mostly manipulative from well timed editing. There’s good use of light and dark. And there’s an evil character that basically looks like the grown up version of the girl from The Ring, you know, the black stringy hair, disjointed, etc. But the problem with the film is the script which focuses more on the lore of that character than investing in the actual characters in the story. So you don’t really connect with or care about them to the point where you feel.

NATHEN: I think they almost got there in developing it but then when you feel like you need some more, they pull back. It’s like we’re teased about knowing these people and their situation but not really given enough detail to care, as you said.

RYAN: There could have even been more calm before the storm at the beginning of the film before we see the evil, because that may have led us closer to them but they didn’t do that.

NATHEN: Yeah we see it right away and then when the story develops, it’s more focused on the evil than the story.

RYAN: Working for it, there is a strong cast. Maria Bello, Theresa Palmer, I love.

NATHEN: I ever whispered to you at one point how horrible she looked, but that completely served the part. The acting was good but the story was lacking.

NATHEN: Yeah you think he’s just going to be a blip and then turns out to be a really good guy.

RYAN: He’s a good guy that has bad boy looks – that threw me off in the casting but he’s really good. It’s almost less believable to me that there’s a good guy like him out there than that there was a haunting happening.

RYAN: We saw this late on a Friday night with a rude, boisterous audience who kind of ruined the movie for me. They were narrating and shouting out, like, the entire movie. It was so rude and annoying. This just in – when you go to a movie, there are other people there who don’t want to hear what you’re thinking. It was very distracting and took me out.

NATHEN: The ending was good but abrupt and didn’t really leave room for a sequel, like most horror films end.

RYAN: But this is not The Conjuring 2. It’s a rental.

Thanks For Viewing The Lights Out Review

Mack & Rita, Day Shift, 13 The Musical, A League of Their Own Review