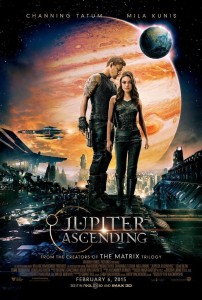 RYAN: This is the new epic, sci fi, adventure, fantasy film with a dash of romance; I think it’s actually the first in a new genre – the sci fi chick flick!  I can’t think of another one. But It’s here and I loved it.  And I’m thrilled to be joined in this review by Michael Zummo, author of the sci fi book series D’mok Revival.

RYAN: I first learned of the movie from you early last year when you saw the trailer and asked me about it.  I didn’t know anything about it yet and when I looked it up I was amazed at how much the imagery looked like your book covers!

RYAN: And tonight seeing the film, again, I was reminded of your work.

MIKE: I did a lot of research going into my writing and this is the look I was going for – space opera – and you see that in this movie.

RYAN: I love this cast and have been looking forward to this and am happy it met my expectations.  I love being swept up into a movie and this is so filled with whimsy, fantasy and romance that it’s all I need to be entertained.  It’s unique in it’s blend of sci fi, like Star Wars, but also very much grounded in present day Earth.

MIKE: One of the reasons I thought the original trailer was so cool was because it looked so different.  It had the sci fi vibe but it had something unique.  I like how all the characters look; different races and devices.  I was sad when the release date was bumped, which is not a good sign, typically.

RYAN: True, and there are some obvious issues with the film – the story has some holes in it. But the good outweighs the bad a lot.  It’s so visually stimulating but no more so than any other blockbuster space movie.

MIKE: We are seeing a trend in faster action, more intense scenes…

RYAN: That’s because of the evolution of technology and effects.  They’re so good.  You’re really transported.  Even George Lucas couldn’ resist going back to upgrade his own movies, visually.

MIKE: Right.  And this is a 3D movie which is even more immersive.

RYAN: Great 3D and this is directed by the Wachowski siblings who did The Matrix trilogy. Some of the actions scenes go on for a while.

MIKE: I did notice the first action scene with Mila Kunis and Channing Tatum did really go on and on.

RYAN: It was noticeably long but I was into it.  BTW, I love their chemistry.  They sizzled and I was swept up into the romance of this film.  It’s a magical subplot.

MIKE: He literally swept her off her feet a few times.

RYAN: Yeah there are some Iron Man moments, some Superman and Lois Lane moments – they make you want to fly.

MIKE: Back to the Future had hover boards, here we have hover boots.  The first comment my son made was that he wants those boots!

RYAN: I was also impressed and overwhelmed by the production design.  The costumes, hair and makeup and all of the environments who so dazzling I almost want a coffee table book to just pour over all the imagery in this movie and linger on it.

MIKE: And there were certain homages paid to Star Wars and Hunger Games movies in design.

RYAN: There is poor buzz going into the movie because it didn’t perform well at Sundance.  There is some choppy editing and there must have been some cuts and the holes int he story requires the audience to make some assumptions.

MIKE: Motivations were not always clear.

RYAN: But ultimately, the entertainment value is so high that I’m not irked it’s not perfect.  I live for fantasy and this really is a romantic fantasy film dressed by as a sci fi movie and all the whimsy and adventure couldn’t have pleased me more.  I would own and watch this movie again before ever seeing those terrible Transformer movies which do so well at the box office.

MIKE: I was drawn more and more into the movie as it went on.  Towards the end I was wondering what would happen next.

RYAN: And Oscar nominee Eddie Redmayne as the villain in this movie is so good!  He harnesses such anger it’s a truly chilling performance.  The trio of siblings were all so cool.

MIKE: He reminded me a little bit of Voldemort in his delivery.

RYAN: I can see that now but didn’t think of that.

MIKE: I do consider this worthy of seeing in the theater.

RYAN: 100 percent. It’s such a big movie experience; definitely worth seeing on the big screen.

Thanks For Viewing The Jupiter Ascending Review