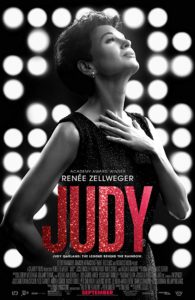 As an Oz historian and lover of film, I’ve always wanted a big screen biopic of Judy Garland’s life, a desire which might have proved a bit of “careful what  you wish for.” Of course no one can really “play” Judy Garland. It’s what makes every production of The Wizard of Oz so challenging – casting Dorothy. In JUDY, we get Renee Zellweger who at times, really does capture some of the legend’s nuance – powerfully in her quick-witted sense of humor and incomparable command at telling a story through song. Those performance bits – where Renee does her own singing, in Judy’s style – are the film’s highlights. The rest of her vocal dialogue performance leaves room for improvement. One still can see Renee and even shades of Roxy Hart, underneath the fabulous makeup job – prosthetic nose tip, fake teeth, widened eyeliner and short wispy hair.

The performance can almost be seen as a broader metaphor for the film’s narrative – the story nails Judy’s essence and the tone of her life’s experience is there; but it is peppered with totally made up instances and interactions in both the flashback scenes of a young Judy during the filming of Oz (the Oz set makes zero sense, lining the Yellow Brick Road with long stemmed poppies) and her late life.  I am appreciative of an artistic team’s right to creative freedom and the filmmakers here bear no artistic responsibility in accurately telling Judy’s story, but I have to wonder whether they have any moral or ethical responsibility for derailing the icon’s legend. People will walk away believing what they saw actually happened. I am fan of adaptation for the sake of dramatization and entertainment value – this film has that. And I didn’t get on the hater bandwagon for The Greatest Showman when it was pointed out how inaccurately Barnum was depicted (It’s still one of my favorite films.) But for those who care – her truth is out there and alongside it, we now have JUDY. 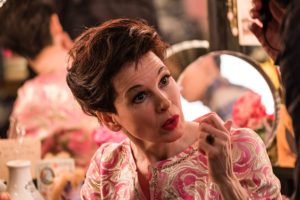 This film portrays her life’s story as culminating in the ultimate child star’s cautionary tale and hints more at suicide than accidental overdose for her death. Renee is garnering major awards buzz for her performance and you can see how hard she committed to and worked with the material. The costumes and makeup are also stand-out and supporting cast really does that – supports the lead.

The final scene culminates as any one of this topic must – with a very emotional Over the Rainbow. That was best part, however ironically hopeless. Literally heartbreaking – there is an actual “quote” at the end of the film that is credited to the wrong source. “A heart is not judged by how much you love, but by how much you are loved by others.” On screen it is attributed to L. Frank Baum, “The Wonderful Wizard of Oz.” However – that sentence does not appear in the book and was not written by Baum. It was written by E. Y. “Yip” Harburg, for the classic film “The Wizard of Oz,” as the Wizard gives the Tin Man his heart. I alerted the studio of this egregious mistake – so they have the option to decide whether to correct it prior to wide release on September 27. I hope they do. It is one thing to take dramatic liberties with a story, but embarrassing to put a graphic on screen that is just inaccurate.

Still, it was fun to see a new cinematic feature with “Judy Garland” in the cinema in 2019. And regardless of its problems, I sat rapt while viewing.

Thanks For Viewing The JUDY Review